Water hoses and fireflies: Learning When to Bend the Rules 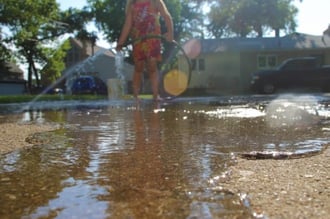 Water hoses and fireflies: Learning When to Bend the Rules

“Shhh…!” My two at times mischievous daughters thought their mom slept as they scurried down the hallway.

One of those beautiful summer nights, just after sunset yet the heat hung perfectly in the air, motivated them from the couch to the backyard swings. The play-set for the girls, ages 15 and 11, still remains where they talk and hung out, literally still hanging upside down, chatting, sharing secrets.

This summer sizzled more so than others with sibling arguments, as thick and never-ending as the humidity in Wisconsin. So on this evening, when giggles replaced anger, I didn’t worry about their early morning camps. I kept my eyes and mouth shut, rather than spoil their spontaneous fun.

When I heard the hose squeak on and water run, I still didn’t move from my bed. But as I heard them spray one another and shriek with laughter, I began to wonder: Did they put their swimsuits on or were they getting soaked in their clothes? I could’ve got up and asked them, or looked out the window, but instead I thanked God for the sweet memories in the making.

I’m starting to understand that Jesus wants me to be more in the middle, with a loving, open heart, on a moment by moment basis. Maybe that’s where I, pretending to sleep and listening to my daughters, hung in a joyful balance that night.

In the Gospels, people often questioned Jesus about the rules they believed he was breaking. They called him disobedient to the laws of the land, and he was eventually put to death for it. Yet Jesus in his wisdom always made a point to confidently express that He was following the rules, the laws of the only One to truly follow – his Father.

At home that night, the back door opened and shut and another “Shhhhh!, followed by “Fireflies! Fireflies!” Now I could hear them in the kitchen, as they searched for a container I assumed to capture fireflies. I tossed under my covers. Were they dripping water from their swimsuits onto the kitchen floor? What if they slipped and fell?

I felt tempted to interrupt them, but again decided to go with the flow and let their adventure continue. The next morning, I woke up to bits of grass in the hallway and kitchen and wet clothes strewn about the bathroom. I would have them pick up their messes up later. Sometimes rules are meant to be bent.

Out in the backyard, their flip flops lay about the grass, left where I imagined they flicked them off their feet as they ran spraying the hose and catching fireflies. That morning I felt especially glad that I let my precious daughters play in the night.

I am learning to love myself and others more, as Jesus loves me, uncritically, giving me freedom to know when to work and when to play, and believing that I am perfect as I am even if I’m bending the rules.