Raising Izzie - An Inspirational Movie for the Entire Family 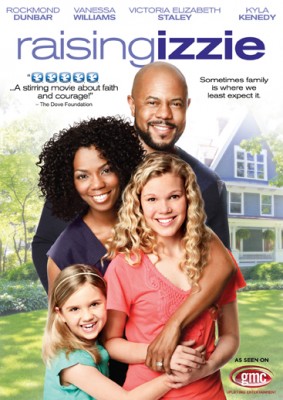 I recently had the opportunity to preview the newly released family film Raising Izzie. Here's a synopsis of the movie, which is now available on DVD:

14-year old Gertie (Victoria Elizabeth Staley) is singlehandedly raising her little sister, Izzie (Kyla Kenedy). Orphaned after their mother's death, the two girls are secretly living on their own, attempting to stay under the radar so they can remain together. Meanwhile Gertie's new teacher, Mrs. Freeman (Vanessa Williams), and her husband (Rockmond Dunbar) struggle with their inability to have a child. Both Gertie and Mrs. Freeman have fallen from faith, but can these two "broken" families find renewed devotion by coming together? Gifted with an inspired cast and an uplifting message, RAISING IZZIE will touch your heart with the healing power of faith and family!

While none of the cast members were familiar to me before viewing Raising Izzie, I immediately fell in love with Gertie (Victoria Elizabeth Staley) and Izzie (Kyla Kenedy). Both girls gave emotionally charged performances that -- when blended with the talents of Vanessa Williams and Rockmond Dunbar -- had me laughing, crying and wishing for more of their story.

The story at the heart of Raising Izzie may seem a bit far-fetched at the outset: two children, left to fend for themselves in a situation actually set up by their dying mother. But truthfully, Gertie and Izzie represent so many children left to work their way through the foster care system for a variety of reasons. Their challenges, as well as the Freemans' openness to a new definition of "family" should be an inspiration to all of us.

This film is not-rated. While it does not contain any objectionable material, some of the scenes are emotionally intense. As such, this is a film which is best viewed as a family so that the themes covered may be discussed and processed together. I believe Raising Izzie is appropriate for school-aged children and could be an excellent conversation prompt for your family.

Enjoy the preview of Raising Izzie:

Order Raising Izzie on DVD or Instant Video and support CatholicMom.com with your purchase