One of my favorite and most used gadget acquisitions of the last couple of years has to be my Roku streaming player.  It's a tiny, little device that allows me to instantly stream Netflix, Hulu, Amazon Instant Video, and a host of other services from any TV. 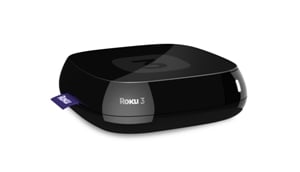 Since I first started using this device, streaming devices have become more mainstream, and many TVs, Blu-Ray players, and other devices also come with this functionality.  Why, then, would someone want to pay the extra cost of a separate device?

The first reason is portability.  This small unit easily transfers from room to room in my home, and I can hook it up to any one of our TVs.  It has a built-in WiFi connection, so there is no need for a dedicated Internet connection for it.

It's so portable, in fact, that it often travels with me.  Ever get bored sitting around a hotel room late at night?  A Roku streaming player is the perfect cure.  In fact, when my wife delivers our baby in the next month or so, our Roku will be coming with us.  What better way is there to help my wife distract herself from the "joys" of childbirth than her favorite collection of movies and TV shows?

Another great reason is the channel lineup, which includes EWTN and the CatholicTV Network.  Now, you can stream your favorite Catholic channels anywhere.  There are a host of other Christian and family-friendly channels as well.

The Roku even includes some radio channels so that you can listen to your favorite stations by turning your TV into a radio.  Two of my favorites include the K-Love and Air1 channels.  I'm just waiting for some of our Catholic radio stations to jump on board.

Of course, there are the streaming video juggernauts, Netflix and Hulu, which have all but replaced my regular TV viewing.  Plus, I would rather use Amazon's Instant Video, playing (and paying for) one video at a time, compared to a hefty cable bill because I forgot how many movies I watched that month.

Despite these reasons, why would anyone pay for a separate box?  Why not just buy a Blu-Ray player with the same services (at about the same price)?

Functionality.  I have a Blu-Ray player at home that also has streaming services built-in, but the interface is not as user friendly as Roku's.  Plus, I cannot imagine packing my Blu-Ray player for my next trip out of state, and Roku's channel lineup far surpasses most other devices.

The Roku costs between $49 and $99, depending on model, and some of the channels have a charge, as well (usually about $8).  Some (including my wife) may not like the $8 fee per channel, but it makes up for itself in savings on the cable bill.  I no longer need to pay extra for channels I don't watch and premium movie channels that play the same movies over and over.  Part of me actually feels that I could cancel my cable altogether, but then how would I watch football?

The Roku in our home has become one of our primary sources of electronic entertainment.  We control what we watch, and when we watch it.  That alone is worth the price.

If you're looking for a cool gadget or the perfect gift for your husband, give the Roku streaming player a try.  It's well worth the small investment.