What Can I Do? Three Steps to Reduce Income Disparities

What Can I Do? Three Steps to Reduce Income Disparities 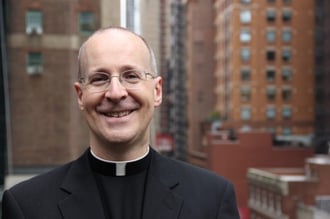 Before I entered the Jesuits in 1988, I worked for six years at General Electric in their finance department. Before that, I studied at the Wharton School of Business, where I majored in finance, which also meant taking courses in accounting, management, securities, bonds and real estate.

Why am I telling you this? Not to brag, but to establish a bit of bona fides when it come to talking about the economy, about business and about work on this Labor Day. The U.S. Conference of Catholic Bishops, building on Catholic social teaching, which builds on the Gospels, has called us to work for a more just world, particularly in terms of income inequality.

But the average person, who is neither an economist, nor the head of the World Bank, nor president of the United States, might ask themselves: How can I help?
Here are few easy steps.

1.) Educate yourself. Did you know that income inequality in the United States is getting worse, not better? Despite worldwide increases in technology and productivity, the gap has only widened over the last 40 years. Here’s a statistic that might shock you. Three decades ago, CEOs in the United States were paid 42 times as much as the average U.S. worker. Today they earn 354 times as much. The rich are getting much richer, the poor much poorer. Educating yourself with simple facts like these can help raise your consciousness, make you more alert to income inequalities in your workplace, and help you in the voting booth.

2.) Pay a just wage. That sounds pretty obvious. And most of us might say, “Pay me a just wage!” But if you are in any decision-making position in a company, you might ask yourself a version the Golden Rule. Are you paying your employees what you yourself would want to be paid for that job?

3.) Honor human dignity. What does that have to do with income inequality? A lot. You saw that figure about CEO’s earning 354 times as much as the average U.S. worker. From my experience in the corporate world, I can say that this disparity sometimes makes people on top feel that they’re 354 times better, or 354 times more valuable, or 354 times more important, than the average worker. From there, it’s an easy leap to treating the average worker like dirt. The vast majority of people in the corporate world (in the world in general) are good, decent, moral people. But in my few years in the corporate world I saw countless examples of people being treated like trash, with less of the dignity that they deserve as children of God. The person may work for you, but they belong to God.

Finally, pray. Pray to understand the plight of the poor, the unemployed, the underemployed, and the overworked. Pray for a reduction in income disparities. Pray for a just world.

James Martin, SJ (Wharton ’82) is a Jesuit priest, editor at large at America magazine and author of In Good Company: The Fast Track from the Corporate World to Poverty, Chastity and Obedience.