My Parents, My Heroes 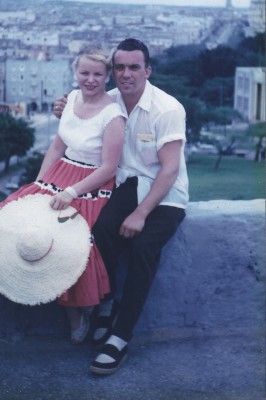 My Parents, My Heroes

Sooner or later each of us has to go through the grief of losing a parent. For me it came all too soon, with the death of my mother in 2006, of cancer. The ages of my boys were 3 and 5. I had expected to spend so much more time with her, expected her to see my boys grow up to manhood. Mom was so vivacious and loved life so much that, when she left us it didn’t seem real.  She seemed still “involved” and my 3 sisters and I have all felt her intercession and her closeness at different times.

I lost my Dad just this summer. I spent ten days with him in May and celebrated his 84th birthday with a special breakfast and a party. Then I flew home to Indiana. In four days I got the call, “Dad passed last night.” He died in his sleep, just as he had always said he would. He had all his business in order so he wouldn’t cause us any trouble. His biggest desire was that his six children would keep the faith and that we would love each other.

I could write many stories about each of them. About the time my Dad left Chicago to fight in the Korean war, how Mom stopped writing, how Dad was broken hearted, how he showed up after his military duty in a fancy convertible with other girls, how his heart always belonged to her and how he won her back. All through their married life, he always called her, “my bride.” Such a beautiful romance, we could all learn from.

So many hard and beautiful lessons have come to me and still come from the loss of my parents, bust one of the most poignant is this: now I have begun to recognize they each had an entire life of which I was only a part. They are more than my Mom and Dad. They grew up, experienced life in their own ways, were influenced by their own families; they were children, workers, lovers, believers, friends and colleagues. As I imagine the totality of each of their lives and their commitment to one another, my esteem of them grows. Their stature and goodness becomes more apparent.

In his eulogy of Dad last summer, my brother ended with. “Thank you Dad. You’re my hero!” This precious sentiment has become my own over the past few months, as I think of my Dad and Mom. They are my heroes, and I hope to live and love with the energy and faith they did, and to pass this love of life and faith in God on to my own children. To God’s Greater Glory!