Miriam: Repentance and Redemption in Rome 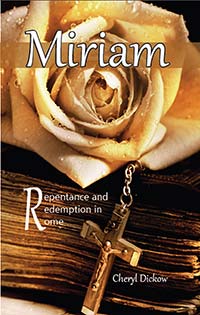 Miriam: Repentance and Redemption in Rome

Miriam: Repentance and Redemption in Rome by Cheryl Dickow is a sequel to “Elizabeth: A Holy Land Pilgrimage,” but don’t worry if you haven’t read the first book. Miriam is an engaging novel all on its own.

Miriam Goldfarb is the Jewish daughter of a woman who was killed in a bombing in Israel. As this novel opens, we meet her as she is serving as a Mossad Agent, a member of Israel’s Institute for Intelligence and Special Operations. She is in love with Joseph, a fellow agent, who has a Christian mother and Jewish father. Because of his background, he is open to learning more about the Christian faith and Catholic saints. It also makes him extremely valuable as a Mossad agent.

The two are chosen for a secret operation in which they will offer protection for an end-times meeting of “The Four Horsemen” in Rome – four highly respected religious leaders who are making a last-ditch effort to turn the world from its evil ways. The four include the pope, the highest Muslim cleric in Lebanon, and two chief rabbis in Israel.

Elizabeth from the first novel returns in a supporting role as she and her husband take a trip to Rome and end up providing support to Miriam when she needs it most.

This is an apocalyptic novel, although the timing of the final coming is not known. It simply maintains that the signs are here and it is time to become ready. One quickly turns pages, eager to wonder how it will all turn out. With Miriam, Dickow has once again made a wonderful contribution to the genre of Catholic fiction.

Order Miriam: Repentance and Redemption in Rome and support CatholicMom.com with your purchase