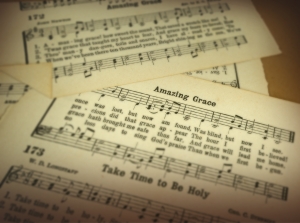 Positive and encouraging, the music on radio stations like K-LOVE helps me and my daughters to lift our hearts to God throughout our days.  When the songs are not directly praise and worship, the lyrics often start with a lament, a description of struggle and pain, followed by how the Lord reached down and eased the suffering.  I sometimes fear my daughters won’t get it, that they’ll focus on the idea that life is hard and will somehow miss the second part about how God transforms it all. Sometimes I want to shake the positive, uplifting portion of the lyrics into them.  As it turns out, maybe I don’t have to.

Although it breaks my heart to admit it, my daughters have shown signs of growing apart.  It’s likely just a phase, as my oldest enters her pre-teen years and her younger sister is still firmly in little girl mode.  But some general unkindness has occurred as my pensive, introverted tween is consistently annoyed with her active, spunky little sister.  Little has been feeling distinctly unloved by Big.

The three of us recently attended a Matthew West concert.  His performance of his hit song “Forgiveness” was moving.  During the song, a video screen flashed some of the lyrics, artfully placing the emphasis on the positive through the creative use of fonts and colors: ForGiveness, Forgiveness, show me how to love the unLoveable, help me now to do the imPossible, etc. A speaker prior to West’s taking the stage encouraged each member of the audience, as the song played, to consider one relationship that needs mending.  Little was listening.

Little sat in my lap during most of the concert, with Big to my right toward the stage.  We were all enjoying the music of “Forgiveness” while watching the video screen, when suddenly Little literally flung herself onto Big in one huge, hard-squeezing hug.  The arena was somewhat dark, but once her initial pounce had subsided, I could see the heaving release throughout Little’s body as she continued to hold on to her sister.  It was a moment with power and beauty.

Christian contemporary music celebrates the human side of life in Christ—our heartbreaks and the joy only He can bring.  If you’ve been holding back from listening out of suspicion because the performers are generally not Catholic, I would urge you to sample the lyrics.  They are all Christ-centered and often straight from the Bible.  The music is inspiring.  Just ask Little.

Keep Christ in Christmas
Read
Jesus is the Answer: What is the Question?
Read
How Christlike It Is To Share!
Read