Two New Classics Bring the Bible to Life for Your Child 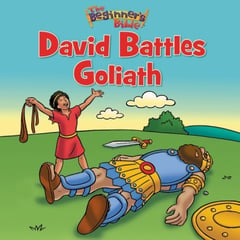 The Beginner’s Bible, presents David Battles Goliath. This version depicts the traditional story of David and Goliath in a vibrantly illustrated children’s version. Simple and easy to read, the book brings to life the essence of the story of David and Goliath. Children will love the bold, colorful illustrations and will be engage as they read (or as they listen to) the story. The moral of the story comes through in a manner that children will connect to and carry over into their daily lives. Reading David Battles Goliath will become a childhood favorite!

Order David Battles Goliath and A Queen Named Esther by clicking on the titles here and support CatholicMom.com with your purchase.

Lorrie Lane Dyer is a facilitator for the Virtual Learning Community for Faith Formation with the University of Dayton as well as religious education and parish coordinator. She is working on her Masters of Leadership Development, with a focus in Military Chapel programs at St. Mary of the Woods College. Her faith provides her with inspiration for many of her poetry collections, columns and short stories.