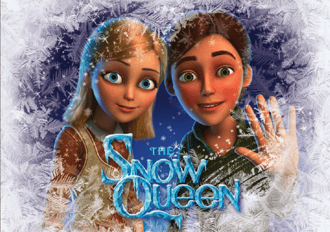 “Legends are more than the truth,” says Orm the troll and narrator of this animated children’s story based on Hans Christian Andersen's fairy tale. Though not as overtly religious as the original tale, this movie follows the journey of Gerda, child of the last Wizard on Earth who opposed the Snow Queen Irma, and Gerda's attempt to rescue her brother Kai before the Snow Queen brings on a permanent Era of Frost upon the Earth. With riveting action sequences, comic relief, and more reflective moments about the origins and challenges of evil and the importance of family, Gerda and Orm daringly escape one situation after another until their penultimate encounter with the Snow Queen and the most daring risk of all.

The Snow Queen's wish to dominate a frozen world with no signs of artistic or creative warmth is embraced in varying degrees by some characters in the story who are driven either by fear or selfishness. Through their journeys, Gerda and Orm learn the courage to face this fear and to overcome selfishness by embracing others in trust and hope. Irma the Snow Queen also confronts the power of fear and selfishness and the need to make a choice for positive change.

My 7 year old astutely compared this storyline to The Beatle's YELLOW SUBMARINE, in which the Chief Blue Meanie sends out Max, Glove, and a host of others to rid the world of music. Ultimately Glove is turned into Love, and the Chief Blue Meanie stops his campaign to freeze the world as he learns to embrace the color and warmth of others. That film's mantra was "All you need is Love." THE SNOW QUEEN challenges us to understand the more complicated lesson that "Irma learned having hatred in your heart would only bring on happiness." Legends are more than truth. And this film has much more to offer on reflection for children and adults than just "how does it end?"