A few weeks ago, I was at a parish event, catching up with another mom that I hadn't seen all summer.  Before asking for advice about an anti-Catholic acquaintance, she said, "You're a convert, right?"

My initial reaction was to think that this was a compliment.  My logic was this: 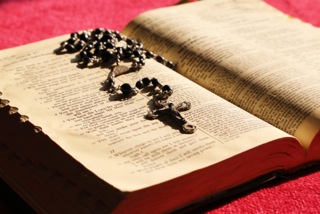 I left that conversation feeling pretty proud of myself.  Somehow, I had convinced this woman from my parish mom's group that I knew enough about the Faith to make her think that I had converted.

It made me think about the time two Jehovah's Witnesses knocked on my apartment door when I was 23, single, and student teaching.  They were two friendly women in their early twenties.  When they asked if they could come in, I said, "Sure!  I should warn you, though.  I'm Catholic and have no intention of converting, but I'd love to visit."

They were visibly caught off guard and looked at each other to see what their next move should be.  One of the women said, "Oh...well...sure, yes, we'd love to come in."

The women and I visited on my couch for probably half an hour.  At the end of the conversation, they said they had never met a Catholic who could give a solid defense of their faith, cite Scripture, or give a response beyond, "Yeah, well, thanks, but no thanks."

I ended up inviting the young women to my parish women's group that evening.  Of course, they declined, but they left with a new outlook on Catholicism or at least Catholics in general.  All of the kudos goes to the Holy Spirit on that one!  I remember being a little terrified because I had only started to feel confident in my ability to articulate the Faith.  I remember praying, "Come, Holy Spirit.  Come, Holy Spirit.  Now!  NOW!  COME, NOW!"

Stereotypes have to start somewhere, right?  If the assumption is that only a convert would know that much about Catholicism, what does that say about the rest of us cradle Catholics?  Well, it means those of us born and raised as Catholics probably weren't catechized well enough to articulate or defend the Faith.  It means most of us "in the flock," so to speak, haven't tried to investigate the faith or "own it" as we transition into adulthood.

This is bad news for the future of the Church.  First, I need to say that I am leaps and bounds from being ready to be some kind of apologist or professional defender of the Faith.  I have PUH-LENTY to learn!  If the friend from my parish mom's group thought I was a convert, and the female Jehovah's Witnesses that knocked on my door were impressed with my breadth of knowledge (ha!), we have a loooooooooooong way to go as a Church.

It's time to turn the stereotypes about Catholics being ignorant of the Faith on their head.

What if Catholics were known for their missionary zeal?  Well, we're supposed to be!  I've always admired the courage of Mormons or Jehovah's Witnesses that I see walking door to door.

If you're an adult Catholic and feel like you don't have much head knowledge about the Faith, have no fear!  There are plenty of places to go to learn more.

I attended Catholic school for twelve years.  Nobody challenged my Faith until I was a freshman at a secular university, so I had few opportunities to be challenged.  Fortunately, the University of Nebraska-Lincoln had a vibrant Catholic community.  I got in touch with FOCUS (Fellowship of Catholic University Students), and I learned what it meant to be Catholic beyond attending Mass on Sundays.  My time at UNL introduced me to many other resources that helped me on my journey toward "owning" the Faith.

If you're looking for a way to delve deeper and learn more about the Faith, here are a few of my favorite go-to resources:

Listening to Catholic radio, especially Catholic Answers Live, opened my eyes to the beauty of the Faith and strengthened my resolve to learn more so that I could give a coherent response the next time I had one of those "Oh, you're Catholic?" conversations.

Of course, the best defense of the Faith is a happy disciple that makes someone say, "Whatever it is that makes them so happy, I want that."  However, there will be times when someone asks, "Why do you worship Mary?" or, "What's the big deal about contraception?" or, "Why go to confession when you can just pray to God?"  You want to be prepared for those moments!

If you're Catholic, you might as well have a reason for believing what you believe, right?  Besides, St. Paul told us, "Always be prepared to make a defense to anyone who calls you to account for the hope that is in you, yet do it with gentleness and reverence" (1 Peter 3:15).

Show the world that you don't have to be a Catholic convert  to know the Faith.  Head to Catholic.com, download a podcast from Catholic Answers, look up a passage from The Catechism of the Catholic Church to find out what the Church teaches about a specific topic, sign up for a Great Adventure Bible study--do something.  Start somewhere.  You won't regret it!

I'm facilitating (and I use that term loosely!) the Jeff Cavins Bible Timeline study.  Never in a million years did I think I'd be leading a Bible study.  You know how they say "God doesn't call the qualified; He qualifies the called"?  Well, I DEFINITELY was not the most qualified person to lead a Bible study, but I felt God calling me to start a study for young moms.  We read three Kimberly Hahn books and decided to take on a formal Bible study afterward.  We're halfway through the Bible Timeline study, and it's bringing all of us countless graces.  It's amazing what God can do when you're willing to listen to the call.

You say you want to be a disciple?  Did you know the word "disciple" comes from the Latin words for "learn" or "learner"?  There's a lot to be learned.  We could spend the rest of our lives learning and studying the Faith and never plumb the depths of all that there is to know, but you know what?  That's great news!  That means there's no limit to how much more intimate your relationship with God can become through learning more about Him and His Church.

Allow whatever you learn to change your heart, and be open to the graces that come from the One who created you.

How My Kids Make Me a Better Pray-er
Read
Lights Out! A Lenten Challenge for Your Family
Read
Our First Family Meeting
Read