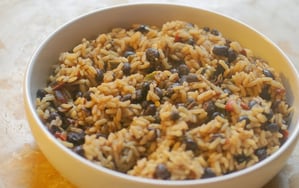 Welcome to October's installment of Year of Faith. Once a month I highlight a saint who has been listed on the USCCB Saints for the Year of Faith. This month’s saint is Pierre Toussaint.

Pierre Toussaint was born on the L’Artibonite Plantation that is now known as Haiti. His mother was a slave and his grandmother was born in Africa where she was sold into slavery. Pierre was raised a Catholic.

As a young child, he worked as a house slave and was educated by the Bernard family. As tensions began to rise and a rebellion began in Haiti, the Bernard family left for New York and took Pierre and his sister Rosalie with them.

After arriving in New York, Pierre apprenticed to become a hair dresser.  Mr. Bernard returned to Haiti to check on his property and soon died of Pleurisy. Pierre continued to support Madame Bernard and became very successful.

Pierre became a very successful hair dresser. He saved every penny he could and eventually bought his sister Rosalie’s freedom and his own in 1807.

In 1811 he married Juliette Noel who was only 15 years old and 20 years his junior. He also purchased her freedom and they performed many charitable acts. They opened their home as an orphanage and a refuge for weary travelers. He was the benefactor of the first New York City Catholic School for black children, it was called St Vincent de Paul and it was located on Canal Street.

As Pierre grew older he continued his charity. At his death at the age of 87 he was known as one of the leading black Now Yorkers of his day.

I decided to make Haitian Beans and Rice in honor of his Haitian heritage.

Place beans in a large pot and cover with 3 inches of water. Bring to a boil. Reduce heat and simmer 1 1/2 hours, or until tender. Drain reserving liquid.

Heat oil in a large skillet over medium heat. Saute onions and garlic until fragrant. Stir in cooked beans and cook for 5 minutes. Measure reserved liquid and add water to equal 5 cups. Add to skillet and stir. Stir in uncooked rice. Season with bay leaves, adodo, salt, pepper, cloves and thyme. Place the scotch bonnet pepper on top and bring  to a boil. Reduce heat, cover and simmer for 18-20 minutes. Remove scotch bonnet pepper and serve.