Do as I Do 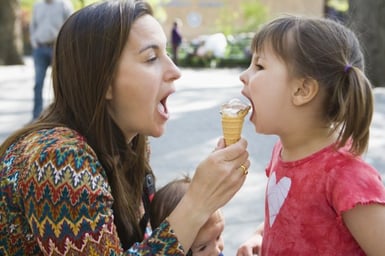 There has to be a top ten list of the dumbest things parents can say to their kids. I don’t want to Google it, because I am certain it will only prove that I have uttered each phase numerous times.

However, I am certain that if I found such a list, at the very top —above “If everyone else jumped off a bridge...” and “Because I said so”, and even before, “Money doesn’t grow on trees”—one would find the phrase: “Do as I say, not as I do.”

This truly is a dumb statement. Children learn through imitation. No matter what, they are going to do as you do.

This is a lesson every parent learns early on: your child will imitate you. Usually, the imitation comes out loud and clear in a large group of people and leaves the parent a wee bit red in the face and asking the child, “Wherever did you learn that?” Or sometimes, it leaves the parent smiling in delight as their two-year-old son correctly begins a sentence with the word “actually” or they see their three-year-old holding her pretend phone to her ear with her shoulder as she makes an imaginary cake in her little kitchen. (Just a note here from a parent of teenagers: This imitation doesn’t end in preschool. It continues on for life, so be aware of what you do.)

This realization hit me hard the other day with my eighteen-year-old daughter. Recently, I have changed my attitude about those I see on the streets holding signs that say, “Homeless, please help” or “Will work for food.” Not that my attitude toward them was ever really bad—it was more one of feeling sorry for them and offering a prayer for them—but I never gave them what they asked for, some money to help them in their situation.

I was kind of lukewarm in my Christian attitude. I am ashamed to admit, but I sometimes fell into this lukewarm mindset as a result of believing the reports on television that talk about people who have nice homes and plenty of money panhandling for a living and getting rich off the generosity of others. Keeping that in mind, I chose not to give to anyone, lest one person take advantage of my kindness.

A while back, I was talking with my friend and colleague, Jeff Cavins, about this very issue and he said, “I always think of what Mother Teresa said when asked about how she felt knowing that some of those to whom she gave would use the money for alcohol or that some actually had money and were taking advantage of her. She said she wouldn’t ever want to take the chance that she missed caring for Jesus. To her, each one of them was Jesus in disguise.”

That concept changed me, and since that day I have kept money in my car to give to those who stand on the corner asking for help, and I don’t care if they are taking advantage of my kindness. I still offer a prayer for them, and can probably count on one hand the number of times the homeless person receiving the money didn’t say to me, “God bless you.” And I can’t think of a time that I didn’t hear, “Thank you.”

About three weeks ago, my oldest daughter and I were heading to the Mall of America to get her a new outfit for her senior pictures. Since she began driving, we are rarely in the same car together, so she probably had never seen me give money to someone asking for help. As we came up to a red light there was a man, about thirty-years-old, holding a sign saying he was out of work, had children, and that diapers were expensive. (Having had three kids, I knew his pain. The cost of diapers is almost right up there with the cost of their college education these days!)

I rolled down the window and handed him five dollars. He said, “God bless you,” and thanked me and we drove on to our destination. We continued our conversation and never once spoke about giving money to the man. Life went on, so I didn’t think anything of the exchange until yesterday.

Last night, my daughter came home from her swim meet and said, “Mom, I got to tell you the most amazing story!” Then she went on to tell me that she was driving to get something to eat with her team before their swim meet and for some reason, she was singing a song from Mary Poppins, Feed the Birds.

My daughter is an excellent singer and sang this song years ago in a competition, so I was not surprised when she said, “I was really getting into it and was singing at the top of my lungs when I came to the part: ‘All around the cathedral the saints and apostles look down as she sells her wares. Although you can’t see it, you know that she smiles, each time someone show that he cares.’ And right then I came to a stop light and looked up, and there was a homeless man with a sign that read: Show that you care. So, I rolled down the window and gave him the only money I had, my ten dollars for food before the swim meet. I had to. It was like God was speaking right to me and telling me to help this man.”

Now, I know God speaks to us in various ways, through Scripture, through prayer, through the Sacraments, through nature, through people who come into our lives, etc... and I know that God was speaking to my daughter through a song that was put on her heart, but I can’t help but wonder if she would have missed seeing the homeless man right in front of her had she not witnessed her mom give money to a man holding a sign three weeks earlier.

As a mom, I know I will probably hear myself say, “Because I said so” another kajillion times in my life, and I will probably cringe when I hear it; but I will take some comfort knowing that my child imitated me and actually did what I did...and in doing so, who knows, the King just may put her at His right hand and someday say to her: “Come, O blessed of my Father, inherit the kingdom prepared for you from the foundation of the world; for I was hungry and you gave me food, I was thirsty and you gave me drink, I was a stranger and you welcomed me, I was naked and you clothed me, I was sick and you visited me, I was in prison and you came to me” (Mt 25:34-36).