A Store Brings Peace to a Busy World 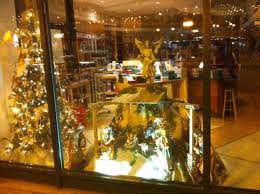 Amid a busy North Michigan Avenue, there is a location where people can go to escape all the noise from the street.   Inspirational music is playing from speakers outside the storefront of a small brick building at 172 N. Michigan Avenue.  This is the location of the Pauline Books & Media store, operated by the Daughters of St. Paul.

According to Sister Anne Flanagan, of the Daughters of St. Paul, a woman had come in to the store with a friend after hearing the music playing.  This woman had said, “That music on the sidewalk is your greatest means of evangelization,” according to Sister Flanagan.  This gives people peace and inspiration in the middle of a busy world.

Some customers come to this store several times during the week.  Mike Lotus, of Oak Park, Ill., has been coming to the Pauline Books & Media store since 1993.  His first encounter with the store was to replace his lost pocket rosary and then he found the chapel located in the back of the store.

As you enter this small chapel, there is a small fountain of holy water and two rows of chairs.  There is a gold box in the front of the chapel and a crucifix on the wall.  The light is dim with a quiet atmosphere that gives customers peace.

“There are a lot of people of other faiths who come in and feel this peace and serenity,” said Juan Villegas, an employee at the Pauline Books & Media store.

Since the Sisters who staff the store offer other services in addition to their books and media products, this is a unique store among the others that one finds on North Michigan Avenue, according to Lotus.

“This is not an ordinary business. This is an apostolate that the Sisters have.  … People who work here are very nice because that’s what they’re doing,” Lotus said.

The Pauline Books & Media Store, in helping people to find peace while they are taking a break from their work, has a mission to "spread the word of God," said Sister Lusia Yvonne Ielonimo, of the Daughters of St. Paul.  They use any form of the media, including a publishing house and the Internet, to help the Catholic Church spread its message.

Villegas said the scripture verse, “Go into the whole world and proclaim the Good News to all creation” is on the wall as you enter the store and shows what the purpose of the Pauline Books & Media store is about.

"Anything we provide is on the side of spirituality," Sister Ielonimo said.

Within the location of the bookstore, the Daughters of St. Paul share the faith and build hope among their customers.  According to Sister Flanagan, they do this through a variety of media products that are offered.  If the Sisters and staff members are informed about the books, music, or movies that are sold at the store, then they will be able to help their customers with what they need at that moment in their life.

In addition to the various media products that are offered, they also try to use forms of new media to share the message of the Church with people.  Both Sister Flanagan and Sister Helena Burns are actively using Twitter in addition to the work they do at the store.

"My liturgy haiku of the day [on Twitter helps to share the] gospel message," Sister Flanagan said.

The Daughters of St. Paul also have a number of apps that people are free to use to help them in their lives.  One of the apps that they have helps people with the Mass and another to help people with surviving depression.

The Pauline Books & Media store also offers people an Adult Faith Program on Saturday mornings.  In this program, they use the Catholicism DVD series, created by Fr. Barron of the Archdiocese of Chicago.   In the future, Sister Flanagan hopes to bring back their Theology of the Body program where they stream live on the Internet to involve a wide variety of people to attend.

According to Sister Frances Obrovac, of the Daughters of St. Paul, their order of nuns first came to Chicago in 1979.  This was right before Pope John Paul II had visited Chicago.  Before the Daughters of St. Paul occupied their current location, there was a clothing store for men.  The building had previously been owned by a man, now deceased, and his family wanted someone who would be respectful to the building.

As with any small company, there are challenges to staying in business.  Like many other bookstores, the Pauline Books & Media store faces the difficulties in the changes of the electronic versus paper books.  To combat these challenges, they use new media such as Twitter and mobile phone apps to reach out to their customers.

Every customer who walks into this store is treated like family and the Sisters will “respect them for who they are [because] every person is an image of God,” said Sister Obrovac.