Am I Playing My Drum for Jesus or Myself?

Former President George W. Bush recently sat in the guest seat on The Tonight Show with Jay Leno and talked about his newfound love for painting. “I do take painting seriously. It’s changed my life,” he told Leno.

It’s that last statement, “It’s changed my life,” that really has me thinking. Is there a hobby, a gift, or talent, which has changed my life? What about you? Ponder it with me for a bit, please, and we’ll come back to it by the end of this post.

Four years ago my husband and I embarked on a remarkable journey. If it be God’s will, that journey will experience a pit stop of sorts come August 2014 when Joel will be ordained to the permanent diaconate. This current road to ordination, like any call, has experienced many bumps, bends, detours, sudden stops, and starts. Because of the intensity of the formation process, many of the activities I once volunteered for have been pushed to the back burner, if not altogether put down.

At times I’ve been downright bitter about that and hosted plenty a pity party. Why is Joel’s call greater than mine? How many times must I say no? I don’t like sitting in the passenger seat! I often feel smothered by the collective demands of formation and motherhood. It hasn’t been easy. But no call is, is it?

When I completed a Called & Gifted workshop eight years ago, the gift of music dominated my charisms list. No surprise. It’s a rather public charism, and the people I took the class with all assumed it would be at the top, too. Just as President Bush mentioned painting has changed his life, music has changed mine. I’ve been cantoring at Mass for nearly twenty-five years, and I have undergone a deeper conversion through music.

But for now, all of my formal music involvement has been set aside; the demands of Joel’s formation take higher priority. Because we have three children ages five years and under, I’m not sure when I’ll be able to formally pick up music again. Joel’s called to serve at the altar. I’m called to serve in the pew. 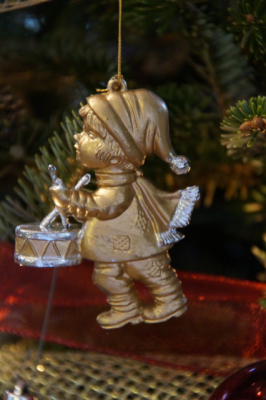 For the rest of the Mass, I pondered her compliment. And I cried a bit when realizing my ongoing pity party was blinding me from seeing the other ways, perhaps more interpersonal yet equally powerful, to share the gift He has given me.

The moment reminded me of the Christmas carol, “The Little Drummer Boy,” where we sing of a boy who thinks he has nothing to give the Christ child and it is Mary who encourages him to give the simple gift of himself and his music. The boy then plays his drum remembering, "I played my best for Him," and "He smiled at me".

Really? All that work, all those hours of practice, just to play in a smelly stable for one little baby? Yes, precisely.

With a similar nod from Mother Mary, I must also offer my gift, however simple, however private, for Him and not for me. As St. Jerome wrote, “It is our part to offer what we can, His to finish what we cannot.” As much as music HAS changed my life, the charisms we are gifted with must be for the benefit of others. We are called to develop them and give them away, to use them together with our natural talents to serve God and our neighbor.

A deacon once advised Joel that he must become comfortable with the following: he may be asked to start a ministry, see it flourish, and then be asked to put it down and watch it die when he’s needed to serve somewhere else. And that’s okay; Joel is not being ordained for himself, he is being ordained for others.

If you subscribe to the idea that your gifts are meant to be given away in service to God and others, it will allow you to bloom where you’re planted. Otherwise you’re always going to be frustrated by the growing conditions.

Is there a gift that has changed your life? Ever had to let go of it only to discover God was calling you to share the gift differently? What’s your bloom-where-you’re-planted moment?