This past week I had the great honor of reviewing Ignatius Press’s Witnesses to Mystery: Investigations into Christ’s Relics, by author Grzegory Gorny and photographer Janusz Rosikon, a gorgeous coffee table volume that traces the history of Christ’s relics. 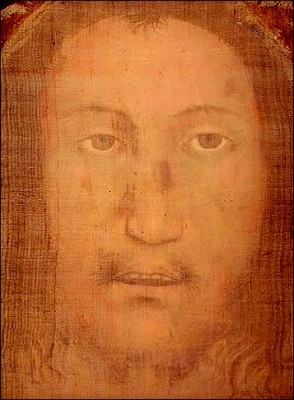 "Volto Santo from Manopello" by emman-commonswiki (2006) via Wikimedia Commons.

There, in my living room, I found myself gazing for long hours at full-page photos of the Shroud of Turin, the Crown of Thorns, the Holy Nails, famous chapels and reliquaries, and most stunningly, the Veil of Manoppello, the veil that Veronica had given to Jesus during the Way of the Cross which bears the image of Our Lord’s Holy Face.

I learned details about the crucifixion that I’d never known before: how the nails used to hold Jesus to the cross were most likely carpenter’s nails and how after His death Christ’s blood flowed down into the crevices beneath the rock of the cross to where Adam’s remains were buried.

I was enthralled by the detailed scientific testing that had been used to verify the authenticity of relics long preserved by the Church.

In particular, the section dealing with the Shroud of Turin was especially illuminating. The book details the origins of the cloth of the shroud, which was “identical to that of burial clothes found in tombs at the Jewish fortress of Masada dating back to the first century A.D.” (p. 54). The section addresses the nature of the image itself, which is a photographic negative; the “depth of the image’s coloring is just 200 nanometers–the width of one of the material’s miscroscopic cell walls” ( 69). It details the plant specimens that the scientists found on the shroud that are indigenous to the Holy Land, as well as the blood from the shroud, discovered to be type AB, found in only 4 to 5 percent of the world’s population but occurring  ”more frequently among Jews, however, accounting for 18 percent of the Jewish population” (55).

Indeed the details that science can extract from these relics are simply astounding. With regard to research done on the Sudarium of Oviedo, or the scarf tied around Christ’s face as He still hung on the cross but after He’d died, revealed a condition of blood that results from pneumothorax, “the presence of air in the space between the lungs and the chest wall, which allowed a mixture of body fluid and blood to settle in the chest cavity after death,” a symptom that would’ve resulted from crucifixion and asphyxia.  This corresponds to the account from St. John who said that blood and water had flowed out of Jesus’s side after he was pierced by the soldier (158).

The intricate histories of the relics’ journeys from the Holy Land to the rest of the world were an excellent education in Church history. In fact, I was comforted to read about the Church’s history, even its tumultuous times, as it reminded me that our holy faith, including our physical tokens of it, have remained with us for so long despite extraordinary dangers.

In the seventh chapter, entitled "The Veil of Manopello," Gorny recounts,

“In 1527 during the sack of Rome L’Urbano di Messer wrote to the duchess of Urbino, ‘Holy relics have been thrown out into the streets. The Veronica has been stolen. It was passed around in taverns from person to person without a word of protest. A German, who sat sharpening the spear that had pierced Christ’s side, tripped over its staff and ran brandishing it throughout the whole Borgo’” (232).

It was a beautiful reminder that the gates of hell will not prevail against the Church, no matter how bleak the situation appears.

I am so grateful for this book that I can bring out to show my little ones during Lent all the precious treasures that Our Lord left for us. Even my three-year-old has asked me a few times to show her again the “napkins” that were left over in Jesus’ tomb after His resurrection. Her little face lit up with recognition when I held the page with the image of the Veil of Manopello next to the picture of the Sacred Heart in our home. They see so many images during the day, I feel blessed that we now this collection of so many holy images in one spot, something that I can easily reach for when our attention might drift in Lent.

The perfect marriage of science and faith, this book provides a unique opportunity to both stoke the flames of love within the faithful as well as those estranged from the faith. The effect of reading this for me was a deeper love for the great mystery that is our Church and especially for Our Lord, who gave His very Life as a token of His great love for us.

“This book is the result of dozens of trips, hundreds of interviews, thousands of photographs and documents. It’s a journey through time (from Christ to the present day) and space (reaching from Spain to the Holy Land). It’s the discovery that scientists (‘the wise man’s glass and eye’, to quote Mickiewicz) reach the same conclusions as masses of pilgrims (‘feeling and faith’). It’s a story about how even science needs humility.” -Grzegorz Gorny

“Touching relics, photographing pilgrims and meeting scientists made me realize that my faith needs both reason and love; those two branches–science and faith–complement and strengthen each other to form a whole. You will find my experiences described in this book.”-Janusz Rosikon

Order Witnesses to Mystery and support CatholicMom.com with your purchase.

"Volto Santo from Manopello" by emman-commonswiki (2006) via Wikimedia Commons in the public domain.