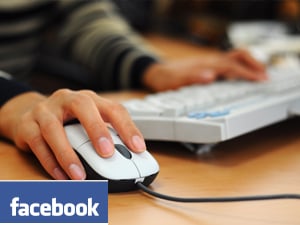 If you feel called to give up a Facebook for Lent this year, you aren't alone. In social media parlance, the idea is "trending."

Before I explain my reasons for seriously curbing my Facebook use this season, let me first acknowledge that social media enables me to do my work as a writer with great ease. It is so critical to my work that I won't be able to completely fast from social media this year.

Also, let me assure you that I know the Holy Spirit works online wonders daily, so no, you are not deficient if you don't feel moved to sacrifice social media this season. It might not be for you. And if you are engaged in online dating, l should tell you that I met my husband online during Lent.

At the same time, social media divides us. The divisive nature of the electronic beast has weighed me down lately. Here are five reasons that I am fasting from Facebook for Lent.

Hurtful Behavior: How many times have I seen Catholic brethren behave badly on Facebook? It could be a rude comment or a mysterious “de-friending” without explanation that will most certainly be awkward the next time I see the individual in person. It could simply be a hurtful code of non-engagement, meaning that despite my overtures to be friendly with someone, they resolutely ignore me, even if we plainly share many of the same interests and causes. My slice of Facebook isn't always welcoming and it has made me bitter and aloof.

Shallow Connections: Originally, Facebook enhanced my connections with friends and family. That time has passed. Now, my closest friends and family stay in touch via email, texts, phone calls, and in-person events. The people I interact with most on Facebook very rarely, if ever, reach out to have a real conversation, and I usually don't either because my sense is that they aren't interested in forming a deeper connection. This means that my steady stream of "likes" and comments don't mean much. Sadly, I could die tomorrow and these people may or may not know about it or mourn my loss.

Exceeded Quotas: You can only take so much depressing news per day without it adversely affecting your mood. Though I am rabidly anti-abortion, I have realized that I can't read article after article, post after post, about pro-life news. I dispense so much sympathy to post-abortive women who regret their actions. I read so many stories about babies born frightfully early. I gasp in shock when I read about a person who survived an abortion attempt. I am outraged when I read about a woman dying after a late-term abortion. But some days, it's too much. I never had an abortion and don't plan to. I have a healthy baby who needs my attention. Though I like to stay informed, I don't really need to be immersed in abortion news 24/7.

Groupthink: As I mentioned at a Year of Faith symposium, we Catholics have fostered an electronic environment that demands absolute conformity. We all parrot the same ideas, the same news, the same opinions...and frankly, I don't think it's a particularly creative environment. I naturally strive to do new things and think outside the box, and don't always see the Holy Spirit within the standard fare. Sometimes, I just think, "Here we go again..." If I have a fresh idea or perspective that I'd like to share, chances are that it will be wasted in social media. People will discount it and scroll on.

Neglected Projects: Lastly, I have a few important writing projects that need my attention. I tell myself that I surf Facebook when it's an inopportune time to work on my projects, but wonder if that's really the case. Could I use my daily allotment of Facebook time to polish a manuscript for publication? I don't know, but if I can, I suspect the finished project will be more valuable than my status updates.

So, come March 5th, my Facebook app is coming off my iPad and iPhone, and I will probably have to turn off notifications given the game invites I get (and never accept).

I hope I get back to basics this Lent. I hope I get to church more, read more devotional books, pray more, all of that good stuff. But most of all, I am interested in the insights I will have after this massive overhaul of my daily routine!

Will you be fasting from any social media this Lent?