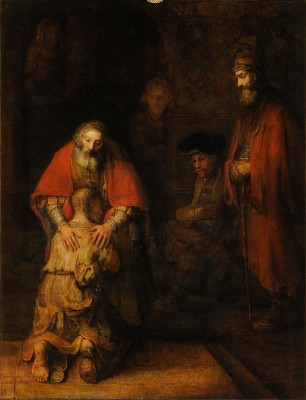 In his wonderful book on the Return of the Prodigal Son, Henri J. M. Nouwen tells of going to Russia and studying the original painting. After days upon days of looking at -- pondering this great Rembrandt original, he then wrote his book with the same name. There are many things we learn from Nouwen about this masterpiece, although I will share but a few.

If you have a book or a holy card and can find this image (perhaps on-line), look closely at the father; he is shown as old and nearly blind. Why would Rembrandt do this to an image representing God? Perhaps this is done to show that the Father doesn’t see our failings and mistakes. The aged Father has seen everything, and the eternal love of the Father transcends our failures. The father sees with the inner eye of the heart.

Nouwen shared another point: the hands of the father are on the shoulder of the son. See that the two hands are different: one hand is strong and virile – it is the hand of a man. The other hand is delicate and slender... it is a woman’s hand. In his genius – Rembrandt shows us that the Father can be seen as both father and mother. How many mothers have not had to come to forgiveness of their children? Scripture tells us – Can a woman forget her child at her breast?

This painting is so much more than the story of one repentant son... or his jealous brother. And speaking of the brother - the painting shows his face, but the body figure is mostly hidden in shadows. A sign that he too is mostly in the darkness of sin?

The story behind the parable is to tell us about the Father. In the biblical parable told to us by Jesus, we learn of the Father’s tenderness and love and mercy. In the painting, sin and forgiveness embrace... We see the Divine Love that existed from the beginning ... and always will. The human and the divine become one. This is also a teaching about Catholic Sacraments – sacraments are the place where the Divinity and humanity come together.

The Creator wants us to be free... free to experience love and freedom. This includes the freedom to leave home. And sadly, the freedom to go to a distant place and lose everything... perhaps never to return. However, the Prodigal story confirms that Father God wants us to come home to him... If we have left Him... if we are in sin... if we are squandering our time or our money or our freedoms from the Father...

God is rich in mercy because of His great love. Let us follow in the path of the Prodigal Son... What do I mean? Well – in the story – the son had to first acknowledge he had sinned against his father. Then he had to turn back and start on the return to home. In honesty and humility – we need to agree that we all are prodigals. Can you do that? That’s the first step isn’t it?

I am pretty sure that each parish in the U. S. will be holding penance services as a prelude to the glory of the Resurrection. But the story of the Prodigal Son reminds us of the need to recognize that it is wrong to explain away any of of the sin we have committed by referring to it as ‘just the way I am.’ We ought to recognize the ever-waiting, ever-patient love of the Father -- and ask for a truly repentant heart this Lent.

Many who hear such words will resist or dismiss the sacrament of reconciliation – the return to a grace-filled relationship with the Father. They resist entry through ‘the’ door – the door of the Confessional. Sin has damaged their understanding of the Sacraments and of Confession.

Here is a quote from Sister Faustina – the nun who helped the Church learn of and to practice the devotion to the Divine Mercy of Jesus. Sister said, “A soul does not benefit from the sacrament of confession if it is not humble. Pride keeps it in darkness. The soul neither knows how, nor is it willing to probe the depths of its own misery. It puts on a mask and avoids everything that might bring it recovery.”

Although I have recently gone to Confession, I know I will go again in a few weeks as we will be in Lent. I’m not very good at the humility that Sister Faustina talked about, and so I need to work at it. Will you join me?