Things Aren't the Most Important 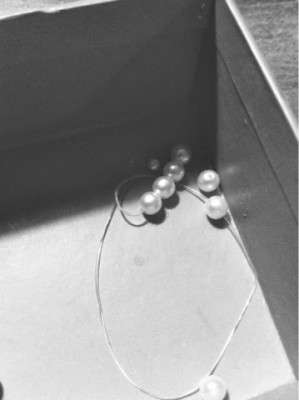 Things can be replaced, and people can’t. People matter more than things. Always.

This is supposed to be true.

Mothers, especially, are supposed to know this.

Certainly, when I look hard into my daughters’ faces and at the tiny pearl beads scattered all over the bedroom floor, I’m supposed to remember that people, especially these small people, are more important than things.

I forget for a minute that I do actually care more about their feelings than about the bracelets they have destroyed.

Aunt Carolyn made the bracelets…my dad’s Aunt Carolyn, the surviving twin sister of his Aunt Marolyn, who died of cancer. They’re the only other twins on either side of my family. When I opened the package containing those bracelets, I wept at how perfectly tiny they were, at how I was going to have two daughters who would wear them, at how Aunt Carolyn had wrapped them lovingly in cotton and mailed them from Louisiana to Virginia for my girls. There were four bracelets altogether - two unimaginably small ones for them to wear right away and two slightly less tiny ones for later on, trimmed with little ribbons.

They are special because with them, Aunt Carolyn was letting me know that my daughters-to-be were special to her.

I wish it didn't matter so much. I wish I was the kind of mom who could shrug and say, "Oh, honey, it's okay, no big deal." No matter how much I wish it, though, I'm not that mother. Sometimes I think my dad made me the way I am. Not only did he believe that how your things were cared for was a dependable indicator of your character, he went and died when I was just five years old. I loved him so much. I miss him so much. For better or worse, I determined early on to make sure that he would be proud of me for taking such good care of my stuff.

Shortly after his death, when we had moved back from Alaska to Virginia, I had a friend over to play. My little sister and I had a new dollhouse with some tiny animal occupants who were all wearing clothes. I left the room for a moment, and when I returned, my friend and my sister were halfway through undressing all the tiny animals, piling their clothes in a heap.

Fury made my raised voice shaky. “What do you think you’re doing?!”

My friend was astonished. “The clothes are made to come off, so I’m trading them around. I’m being creative.”

Through gritted teeth, I told her to get out. Her mom came to pick her up a while later. I didn’t come down to say goodbye. I was painstakingly dressing the animals again, making sure every one looked just the same as it had when it came out of the box. I knew I had hurt her feelings - I just didn't care.

Through years of living with children, I’ve relaxed a lot about my stuff. It's hard to be too precious about things when there are three little people running about all the time. If I’m honest, though, there are certain things that are much more to me than just things- the china cabinet my grandpa made us as a wedding gift, the wooden giraffe from my childhood missionary friend in Tanzania, the little stained glass dove George gave me when I was received into the Church. I remember where all our Christmas ornaments were bought or who gave them to us as gifts. Things, in my case, are definitely more than just things sometimes, particularly when they represent people who meant a lot to me and are no longer around.

Of course, my two-year-old daughters don’t understand this.

They saw the out-of-reach little box way on top of their shelf as a treasure to be won. They pushed their two toddler armchairs over to the shelf, turned them over like ramps, and scaled them until they reached the upper shelf. They stretched the tiny elastic bands in their hands as they bounced on their beds. I imagine them ripping the bracelets apart with gleeful abandon, giggling at the beads shooting everywhere as the fragile bands snapped.

I wish they didn’t know now, but they definitely do.

I yelled at them, demanded to know why they had done this, and forcefully removed them from their room so I could recover as many beads as possible. While their dad read to them on the sofa, I scoured the baseboards, squinting, desperate to rescue as many of the tiny pearls as I could, holding them carefully in my cupped palm. Under one of the beds, I found the lid to the box that had held the bracelets. As I turned it over to pour the beads inside, I gasped.

Inside the lid were the tiny hospital bracelets the girls wore after they were born.

I forgot I had put them there for safekeeping…bracelets with bracelets, it made sense at the time…and it had been so long since I’d opened the box that seeing them there shocked me. I held them in my fingers, putting each one back together to form the impossibly tiny ring that once encircled each baby’s wrist.

How can they possibly ever have been that small?

The hospital bracelets, also, are just things. Tonight, though, they’re the things I really needed to see- a reminder of how far we’ve come, how many trials we endured just to get these girls here healthy and whole, what a victory it was to bring them home with me from the hospital without any time in the NICU. There was a time we were afraid to imagine them as boisterous toddlers, taking life at full tilt, leaving a path of destruction in their wake. We were once afraid to hope we would make it this far.

They’re miraculous, really, as are all children to their mothers.

Their dad put them to bed to give me time to cool off. With Christmas boxes still sitting on the treadmill, typing ferociously will have to do for now.

In a few minutes, though, I’ll sneak back into their darkened room and brush the hair from their foreheads. I’ll smooth their covers and tuck the ends around their little feet. There will be no doubt in my mind that they are more important than any thing could ever be.

Tomorrow, in the clean light of morning, I’ll be sure to tell them that.

Mama, You Aren't a Mistake: A Quick Self-Help Guide for the Weary Catholic Mom
Read
Role Models Like A-Rod Aren't Worth Your Time
Read
Our Crosses Aren't Forever
Read