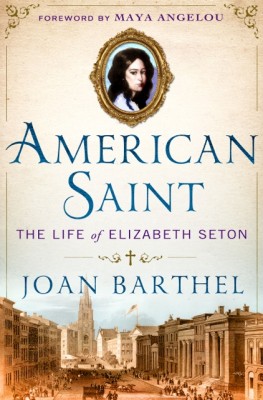 Calling itself "the definitive biography of Elizabeth Seton," American Saint, by New York Times best-selling author Joan Barthel, was just released on March 4, 2014. American Saint is the first full-length biography of St. Elizabeth Seton to be written in nearly fifty years. Published by St. Martin's Press, the book includes a foreword by Pulitzer Prize-nominated poet Maya Angelou and has garnered advance praise from well-known novelist Mary Higgins Clark. Drawing heavily from the saint's own collected writings, American Saint traces Elizabeth's life from her childhood as a wealthy Episcopalian to her death as an impoverished Catholic who founded the first order of American nuns and became the first American-born canonized saint.

The book does not shy away from the darkness of Elizabeth's earlier years. Her mother died when Elizabeth was just three years old, and her father remarried one scant year later. Elizabeth's father and stepmother then separated during Elizabeth's teen years, and Elizabeth's father forbade her from seeking reconciliation with her stepmother. At age 18, as the book recounts, Elizabeth even contemplated suicide, writing an anguished note:

Alas alas alas! Tears of blood! ...
a poor creature made of dust driven by misery,
this the wretched reasoning -- Laudanum--
the praise and thanks of excessive joy
not to have done the horrid deed

American Saint deftly weaves the later details of Elizabeth's marriage, motherhood, and widowhood into a fascinating background of American revolutionary history. The book also describes the immense impact of one woman's conversion to Catholicism on the young Church just starting to develop in the former English colonies. Elizabeth's native state of New York did not repeal its penal laws against Catholics until 1784, when Elizabeth was 10 years old. By the time Elizabeth was 30, she had converted to Catholicism, and by the time she was 35 she had founded the Sisters of Charity and the backbone of the parochial school system, while continuing to raise her five children by herself.American Saint sums up St. Elizabeth Seton as "a woman who had been a Protestant, a Catholic, rich, poor, an aristocrat, an outcast, a wife, a mother (a working mother), a widow, a teacher, a social worker, a nurse, and the founder of the first order of active women religious in this country."

The book treats St. Elizabeth more like an historical character than a member of the canon of saints. It rarely delves into Elizabeth's spirituality, although it praises her "unqualified trust in God" and her "inclusive spirituality [which] meant coherent involvement in the world." For the most part, the book takes an even-handed approach to St. Elizabeth's faith and to Catholicism in general. Unfortunately, that even-handed approach is marred by a largely extraneous introduction likening St. Elizabeth Seton to the liberal Catholic pressure group Nuns on the Bus and to the Leadership Conference of Women Religious, which the Vatican has accused of promoting dissenting views on women's ordination, contraception, and homosexuality. Comments about "the heavy hand of clerical control" and complaints about women's relative position of social inferiority also surface occasionally throughout the book.

In a recent blogpost entitled In Praise of the F Word (F for feminism), the book's author Joan Barthel proclaimed "I was measured for the habit. That's how close I came to becoming a nun." She became a feminist and journalist for Ms. magazine instead. For Barthel, St. Elizabeth Seton seems to represent a prototypical feminist heroine. Thus, Barthel's treatment of her subject differs greatly from a more traditional Catholic perspective. However, her biography is by far the most recent, thorough, and up-to-date account of St. Elizabeth Seton's life.

The previous "definitive" biography, The Soul of Elizabeth Seton, by Fr. Joseph I. Dirvin, was first published in 1962. It was reissued after her canonization in 1975 and is now available through Ignatius Press. Excellent biographies for children exist as part of the Encounter the Saints series (published by Pauline Books) and the Vision Books series (published by Ignatius Press). Other accounts of St. Elizabeth appear as chapters in books chronicling the lives of many saints. But unless and until a Catholic publishing house issues their own 21st century biography of St. Elizabeth Seton, Barthel's book will provide the new standard in scholarship on the life of this great saint.

Thanks to St. Martin's Press for providing a free advance reading copy.