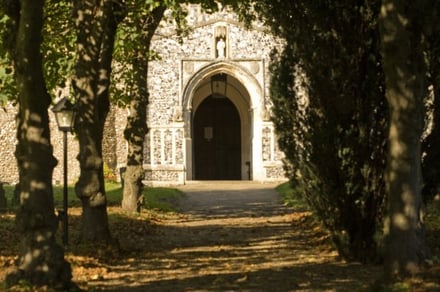 By the time I got married, my white prayer book was yellowed, the lace slightly torn. I carried it with flowers down the aisle. I wasn't Catholic yet but if I was going somewhere new, that prayer book was coming with me. I had found a novena in there by then that I was almost afraid to pray. It had cost me a job once, and moved me ten hours away another time. Both had saved me. I've never regretted praying the novena, but I don't pick it up unless I'm desperate either.

In the sixteen years of marriage since then, more physically usable prayer books have come my way. I keep my original prayer book nearby, but I don't want it rendered unusable before I am. Everything is frayed and worn. I use it sparingly.

"I think you should know," I told my husband before we married, "that however long it takes, I am going to die Catholic. I just haven't done it yet."

Under the bridge of years since then, my mother whom I dearly loved but didn't always understand, died of a rare form of cancer. My father, of the rocky relationship kind, and I have come to what is a delicate peace perhaps, but brooked up by goodwill on both sides. Friends, jobs, and homes have come and gone. Babies have been lost to miscarriage. Children have been born and fill our home with much life.

Easter Vigils in 2008, my husband and I were at long last confirmed into the Catholic church. People ask me why I'm Catholic. The Church's belief in the sacredness of life matters to me. A Catholic choir director in high school, who listened to my troubles and gave many a needed hug, helped. When I was a senior in high school, I would drive by myself to the 7:30am Mass at her church half an hour away. I couldn't take communion, but I could be there. The prayers were a jumble. Nobody tried to stay together. Jeans and t-shirts, suits and ties, most people were too busy mumbling before and after to say hello. But I could kneel and I could pray. It was ok that I didn't belong, nobody else did either. "Lord, I am not worthy to receive you, but only say the words, and I shall be healed."

I believed that. I went back every week just to say it. Why it took me so long is complicated, but since I first heard the prayer of the Centurion connected to the Mass, there was never any doubt as to where I was headed. You could say it was the presence of Christ in the Eucharist that made me ache to be Catholic, because it was. But I don't think that 1962 St. John's Prayer Book that ended up in my hands did any harm either.