Listen to the Pope and Take Heart 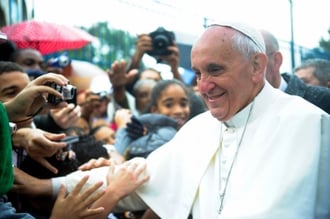 “I’m delighted that Pope Francis has been garnering a great deal of news coverage,” Bishop David Kagan of the Diocese of Bismarck, ND said during a recent media day conference, “but his candor can be disarming to some. It is generating media coverage that often takes words out of context, then misleads people.”   Kagan cautioned people not to believe secular reports of Pope Francis as changing Catholic teaching.

“He’s a Jesuit,” Kagan explained. “He was taught a method of critical thinking that is useful but is getting misinterpreted by the media.” He pointed out that many reporters are mistaking the pope’s promotion of the person of Jesus as primary to the Gospel, with concluding that he is saying that teaching against sin is not so important.

“It is Jesus Christ who is our Savior; it is He who we preach,” Kagan said. “The other things are also important but they flow from the Church’s teachings about Jesus.”

He likened the media pulling Pope Francis’s words out of context then reporting falsely as being like taking words from the Gospels out of context. He used John, Chapter 8 as an example, where the Pharisees and Scribes are ready to stone a woman caught in adultery. They bring her to Jesus and ask him what he thinks.  Jesus writes in the sand then asks them who among them is without sin.  After the woman’s accusers depart, Jesus asks the woman, “Has no one accused you? Nor do I condemn you, but go and do not commit this sin again.”

Kagan said that reporting only that Jesus told the adulteress that he does not condemn her, would not be the true meaning of the story.  Likewise, he said that when Pope Francis encourages us to love others and to be compassionate, he is encouraging us to extend the same mercy that Jesus extends to us.  But, he noted, the pope is not teaching anything new. He is simply doing it in his own style; every pope has his own style.

“Popes don’t break with the faith,” Kagan said. “What the Pope says, we need to listen to and take heart.” He said that one of the things Pope Francis is telling us, is to be missionaries. “By the fact that Jesus sent his apostles out to spread the good news of the Gospel, we must evangelize by how we live and teach.  He stated that by knowing our faith, we can remedy misconceptions about our Church, such as being accused of being anti-women. In fact, Kagan said, the Church is one of the most pro-women organizations, having founded organizations for women, led by women, since the early Church.

To close out the recent Year of Faith, Kagan wrote a pastoral letter to tackle the culture of death.  In it, he focused on the Church’s teaching on the human person as the basis for absolute principles that “are always true in every circumstance.”  Kagan addressed the issues of artificial contraception, abortion, euthanasia, same-sex marriage, racism, in-vitro fertilization and embryonic stem cell research.  He said we have an obligation to know the absolute truth, and then to help others understand this truth, thereby creating a culture of life.

Mixed Emotions on the Pope's Resignation
Read
A Pope for the Rich?
Read
Spend Some Time with the Pope
Read