In 1999 Brian Frackelton created a calendar program and put it up for download on his website.  Someone mistook it for a fertility calendar and that inspired Brian to create some of the best fertility awareness and charting software available at the time.

Now, years later, Brian has taken the software into the cloud and has apps for both iOS and Android, making charting for NFP and fertility awareness easy and accessible for everyone.  With users from over 65 countries MyFertilityCharts.com and the associated apps have helped countless people to achieve pregnancy, assist in child spacing, and helped users to become more aware of their fertility. 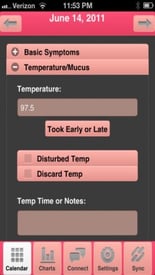 The apps and the website are free to use for basic NFP charting, including temperature, mucous, and symptom recording as well as basic charting.  The website makes it easy to share charts with others, including health professionals and NFP instructors.  Anything logged in the apps or the website is stored in an on-line database which gives users easy access to past cycle data for reference.

The premium version of the site, in which users pay around $5/month or $30/year, activates several features which many users will find useful.  The first is a patent-pending technology which will shade the charts from light to dark, estimating how fertile a person is based upon several different NFP methodologies.  The preferred analysis method to determine fertility can be changed by the users in the settings and this is a great way for couples trying to achieve pregnancy or to space children.

Premium users also get access to more interactive charts, an anonymous library of charting data from other users, cycle statistics, and many other features that make the price well worthwhile.  Anyone who signs up on MyFertilityCharts.com and/or uses the associated apps gets a free 45 day trial to the premium features, and that is without entering any credit card information.  If a user isn't interested in the premium features then they just go away with no hassle.

While the website is the core of the system and has the processing power for all of the features, the apps for iOS and Android are what really make the software shine.  Users are given a portable database for entering their temperature, mucous, and other fertility symptoms.  This will sync with the website whenever an internet connection is available, which in turn, updates the website and does all of the fertility calculations for the premium features.  Multiple users can sign into a single account on multiple devices, so husbands and wives can work together and both be aware of the fertility cycle and symptoms. 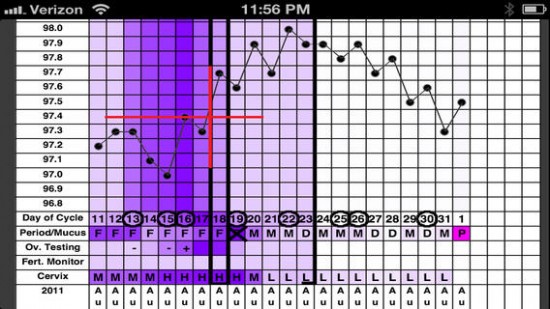 The apps are very easy to use and allow users to enter temperatures and other fertility symptoms, as well as to track custom, user-defined symptoms.  Charts, calendar, and tracking features from the main site are available in the apps, although some of the advanced settings might only be able to be found on the website.  (Note: I am not sure about that because I have never really had to adjust any of the advanced settings.)  The apps also provide start up tips and tricks which users may find useful.  According to Brian, around 85% of his users utilize the apps as their primary method of using the website.  The best part is, the apps, along with the basic charting and recording, are 100% free.

An important thing to note here is that running and developing MyFertilityCharts.com is not Brian's full-time job.  He works, on average, around 15-20 hours on the site a week on top of his job as an electrical engineer.  He says that his main goal is to help people and that while he does make some money, money alone would not justify the amount of time he puts into the site.

No, for Brian, what started as a calendar program mistaken for a fertility calendar has become an outreach to others.  He says that the reason he continues to expand and develop his software is due to the great feedback he has received over the years, along with the success stories of people who have helped to achieve pregnancy because of his work.

MyFertilityCharts.com and its associated apps are a great way to manage and share NFP charting.  Would this resource help to make NFP easier for you and your family?