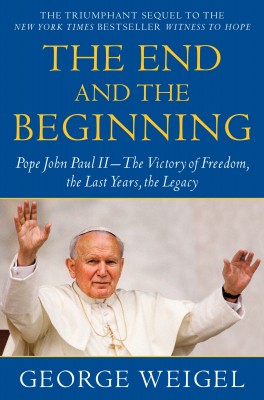 On April 27, 2014 – Divine Mercy Sunday – Popes John XXIII and John Paul II will be declared saints in a historic double canonization ceremony. It is speculated that over 1 million people will flock to St. Peter’s Square to witness this significant moment.

The End and the Beginning: Pope John Paul II - The Victory of Freedom, the Last Years, the Legacy

The End and the Beginning is the thought-provoking biography of John Paul II by internationally renowned author George Weigel. In it, Weigel recounts the tumultuous last years of John Paul’s life with a probing and passionate assessment of a man who lived his life as a witness to hope in service to the Christian ideals he embraced.

John L. Allen Jr., associate editor at The Boston Globe and author of The Global War on Christians called it “essential reading for anyone who wants to understand the man and the Church he led for a quarter- century.”

The book is the result of fifteen years of conversations with John Paul II himself and previously unrevealed communist secret police files. The author gained access to a number of secret Soviet-era police files which show how spies had infiltrated not only the Church in Poland during the Pope's early years as a priest and Bishop, but the Vatican itself during John Paul II's papacy.

“This book is the Rosetta Stone of John Paul II's life and legacy,” said Carl A. Anderson, Supreme Knight and Chief Executive Officer of the Knights of Columbus. “Only George Weigel's masterful combination of rare opportunities and rarer intuitive skill could do justice to John Paul II's epic life that changed the world. If you really want to know John Paul II and his legacy, The End and the Beginning is indispensable reading.”

GEORGE WEIGEL, Distinguished Senior Fellow of Washington’s Ethics and Public Policy Center, is one of the world’s leading authorities on the Catholic Church. The Vatican analyst for NBC News, Weigel is the author of fifteen books, including the New York Times bestseller Witness to Hope: The Biography of Pope John Paul II. His work has been translated into more than a dozen languages. 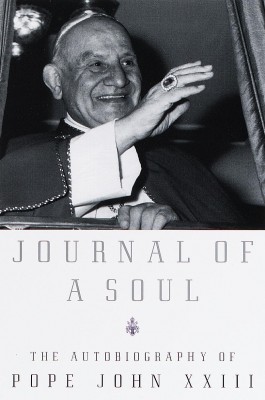 Journal of a Soul: The Autobiography of Pope John XXIII

Journal of a Soul is an inspiring reading experience that records this pope's thoughts and traces his spiritual development from adolescence to the seminary to a career as a priest, a European papal diplomat, Patriarch of Venice, and finally Pope John XXIII.

This Image Books edition features a biographical portrait of Pope John by his personal secretary, Monsignor Loris Capovilla. It also includes several of his most moving prayers, sixty brief thoughts and aphorisms, his "Rules for the Ascetic Life," many of his letters, even his last will and testament.

The New York Times Book Review called it "indispensable for those who would understand the mind which originated the updating of the Roman Catholic Church."

POPE JOHN XXIII (1881-1963) is celebrated for convening the Second Vatican Council, commonly regarded as the most important event in religious history since the Protestant Reformation of the sixteenth century.