Need a Spiritual Boost? There’s a Costume Drama for That.

When life gets overwhelming, period dramas are my escape.  I put on a BBC miniseries and I’m suddenly whisked out of the real world of lunchboxes and scattered Legos and into an alternate universe, a pretty candybox world where ladies float around in gorgeous silks and men bow gallantly and houses come staffed with fleets of servants.

And yet if I say these films are only about escape, I’m doing them a disservice.  The fact is, there is a wealth of spiritual wisdom to be gleaned from costume dramas.  They can show us how to live and how to be; they open our eyes to what matters and what doesn’t.

After viewing many of these films over the past twenty years, I’ve learned one thing for sure: if you’re looking for a spiritual boost in any area of your life, there’s a period drama for that. 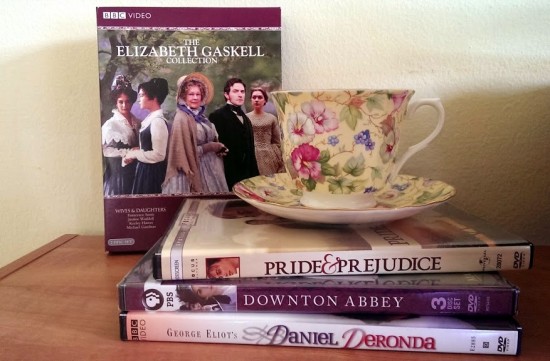 Here are six of the best.

If you’re looking for a testament to the importance of community, check out the 2007 series Cranford.  Set in a small village in the 1840s, this delightful series shows the beauty of people being there for one another.  Whether it’s the townspeople pooling their limited resources to help the doctor with an emergency or supporting those who grieve, this series shows that the same people who sometimes drive you crazy will also be  your staunchest allies when things go wrong.   It’s a series that nudges me to think about what it means to be a good neighbor, colleague, friend.

If you want proof that nice girls do finish first, watch Pride and Prejudice.  It’s no accident that the smart, authentic girl gets Mr. Darcy while the catty, snooty girl doesn’t.  Is that delicious?  You bet. And call me crazy, but this story always makes me think of Mary’s Magnificat: the proud are scattered and the lowly are lifted up.  Whether that reversal happens in the Gospels or in Austen, it’s always wonderfully satisfying.

When you’re moving to a new place or dealing with any other major change, the 2004  series North and South is for you.  In this story, a pastor and his wife and adult daughter have to move from a dreamy rose-strewn country parsonage to the gritty industrial North, where no flowers bloom and everything is bleak.  Mom doesn’t handle it so well, but daughter Margaret rolls with the punches and discovers a passion for social justice (along with a passion for the local mill owner John Thornton).  It’s proof that you really can  bloom where you’re planted, even if the soil seems barren at first. (Bonus: the ending scene is off-the-charts romantic.)

When you feel an urge to micromanage the lives of those around you, watch Jane Austen’s Emma.  (I’m most partial to the 2009 one starring Romola Garai).  The lovable heroine is so sure she can control everything in her life, only to flub it up pretty badly.  Being Austen, it of course ends happily and romantically, but it’s a great reminder that we’re deluding ourselves if we think everyone will dance to our directions.  It also nudges us to recognize that sometimes our own vision of the future is not nearly as beautiful as the one beyond our control.

If you ever feel envious of what other people have, the 2002 miniseries Daniel Deronda will help.  It tells two parallel stories, one about a young girl who can’t handle the idea of being a poor governess.  Disregarding some blatant warning signs, she marries a rich guy who turns out to be the Worst Husband Ever (happily, there’s some redemption at the end).  The costumes and sets are gorgeous, but the behavior of Hugh Bonneville as the awful husband is nauseating, and it’s a great reminder that the desire for wealth and status can make us pretty darn miserable.

Lastly, if you tend to lead too much with either your heart or your head, Sense and Sensibility  is for you.   The very name captures the split between reason (sense) and feeling (sensibility), and the two sisters in the story each exemplify one approach.  I’m partial to the 1995 version with Kate Winslet and Emma Thompson because it subtly highlights the need for balance between the two extremes. (I also love the penultimate scene where the reserved Emma Thompson gets some great news and finally lets her emotions rip.)   It’s a film that invites us to think about which sister we are most like, and whether we could benefit from embracing a little of the opposite approach.

Are there other costume dramas you love?  What are the spiritual lessons they have taught you?