Mother Teresa’s faith-filled life of service is beautifully depicted in the recent Ignatius Press re-release of their film Mother Teresa.  The original version (110 min) of the movie was released in 2003 and it made its way across the world over the last decade.  This year, Ignatius Press released the original, uncut, full-length (177 min) version and it’s wonderful!

I hadn’t realized that I had seen the original version, years ago, but as I watched it, so many of the beautiful scenes came back into my head. Most importantly, the additional 67 minutes of footage truly shows a beautiful, in-depth portrayal of the courageous life of Mother Teresa.  The film filled me with hope and a renewed fervor to live a life that completely trusts in the Lord’s providence and allows me to be a pencil in His hand, as she modeled.

Olivia Hussey takes on the role of Mother Teresa in such an amazing way, from her accent to the way she walks, to the specific facial expressions, it’s as if you’re watching a live documentary of Mother herself.

The cinematography of the film gives it a documentary feel while showing images of the streets of Calcutta and returns to a mainstream film view as we see Mother’s interior life in the convent.

The seemingly realistic view of the slums of Calcutta are truly impressive.  The film is filmed with powerful images that resonate in your heart as you watch the film. The beautiful depiction of Mother Teresa serving the poor is an image I will carry with me.  Especially the specific people that so clearly represent Christ visiting Mother Teresa during her lifetime.

It’s interesting that a few of the scenes eluded to the dark night of the soul experienced by Mother Teresa.  In one she describes how the loneliness is too bear.  I was grateful to Ignatius Press for not originally releasing these scenes, as I remember the confusion that was created when the book about her dark moments was released.  It was baffling to the public that she could have continued such selfless work with no sense of God’s love, but now I think people have come to understand how that made her even more sacrificial and so they can now appreciate these scenes where she bears her trials to her confessor. 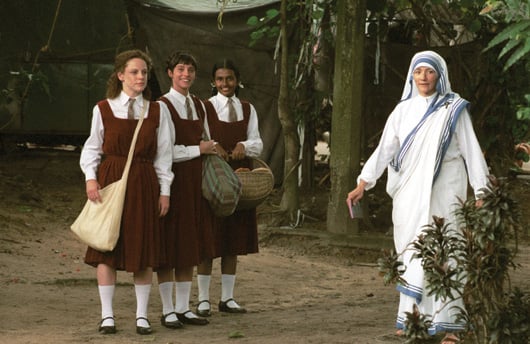 The film shows her life as a child and the love she experienced as a child, it leads us through her journey to become a nun, her life in her first convent as a teacher, her calling from God to leave and care for the poorest of the poor in Calcutta, the opposition she faced in starting her own order and the work of the evil one against her through the delayed building of her City of Hope and financial scandals that people tried to blame on her order.  Through the whole film, we are encouraged and strengthened in the way nothing seems to phase Mother Teresa and instead she handles each struggle with faith in the Lord and a persistence to clear up the issue and most importantly return to her work with the poorest of the poor.

Any film has things that the viewer would have prefered to be seen or dealt with in a different manner.  While the magnitude of this film is truly remarkable, I found myself a little confused by the timeline of her life.  There were a few flashbacks that any film has and the time period is set apart enough that it is understandable.  It was confusing, though, when the next scene moved us forward in time but didn’t necessarily let us know the time frame.  A few scenes did have a year come up to let us know where we were, but it seemed that those were so far and few between, that it made it more confusing and the time jumps were so major, I wondered how the determined what years to skip.  Again, this is only a minor note in such a substantial film.

I think this is a great family film.  I am very protective of the television and movies that my children watch, but both my five-year-old and six-year-old wanted to watch this with me.  Of course there are scenes of violence that I wouldn’t let them watch, but for an adult they are nothing more than the depiction of true life in the Calcutta slums.

While the images of the sick patients is sad, I believed my children benefited from seeing how others live and seeing as I’m not planning a trip to Calcutta any time soon, I saw it as a good social justice lesson for them.  Not being used to watching much TV, they found it hard to sit still and the show must be catered to their entertainment needs, like Daniel Tiger or Sid the Science Kid.  They both sat through the majority of the film.  I had to turn it off at one point before it was done, and they were both asking later that day if they could keep watching the movie about the Mother.  These are the images I want to fill my children with and to be able to refer back to when we all have moments of stubbornness, selfishness or greediness.

The film is filled with beautiful quotes from Mother Teresa, and in one, she says, “If things happen, it’s because the Lord wants them to, if they don’t, He doesn’t want them to.”  It’s clear to me that the Lord wanted the story of Mother Teresa told, and He wanted it told in the realistic, honoring and life-giving way in which Ignatius Press has done.