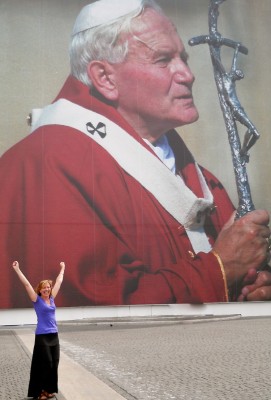 A few years ago I made a pilgrimage to the Shrine of Our Lady of Czetochowa and asked for the intercession of my hero, Pope John Paul II. I spent the day praying to him and to Our Lady and asking for a special intention for what I was doing to help spread the Gospel. I left the shrine inspired, and with my good friend, Patti Jannuzzi, and the official prayer of the Vatican, I put together a nine week Novena for the New Evangelization in preparation for the beatification of Pope John Paul II—a date that was not yet announced the week we began the novena.

The novena began two weeks past our intended start date, and much to our surprise this meant we would conclude the novena praying for all souls on the eve of Divine Mercy Sunday. In theological terms, this was "cool." Thousands of people joined us in praying, and on completion of our first week, it was announced that Pope John Paul II would be beatified on Divine Mercy Sunday—super cool!

For nine weeks we prayed for a specific group and meditated on writings of the late pontiff that pertained to that group. Week one we prayed for the Holy Father and did a meditation throughout the week that was written by Pope John Paul II on the Petrine Ministry. Week two we prayed for our bishops. Week three was for priests and deacons, then religious & consecrated. Week five was for lay apostles & teachers, then married couples & families, then the youth. Week eight focused on the  sick & suffering and finally on week nine, we ended by praying for all souls and meditating on Pope John Paul II's writings on Divine Mercy. It was a powerful prayer and I felt on top of the world having spent almost 3 months praying for and being immersed in the writings of the late Holy Father. But that feeling drastically changed three days later when my world was turned upside-down.

After putting together a beautiful prayer for his beatification and spending nine weeks with him, Blessed John Paul II had let me down—or so I thought. On that day when my life flew into chaos, the litany of saints that I called on to pray for me at the conclusion of my Rosary changed a bit, and it instead of ending the way it always had with: "John Paul 2, pray for me," it now ended with my teeth clenched as I said, "John Paul 2, you better be pray'n!" I felt since he had put me into this mess, it was his responsibility to get me out!

A few weeks later I was blessed to travel to Rome with one of my daughters and we happened to be there at a time in which the newly "Blessed" John Paul II was being celebrated. One day, I knelt at his tomb with tears in my eyes and asked, "Why?" Why had he turned my life upside-down when I was praying for him and trusting him to help me? Suddenly, a peace came over me and I saw his smile through my tears as his words echoed in my heart, "Be not afraid." It was surreal. I stayed in that spot, prayed my Rosary, and as had been my new custom, my litany ended with, "John Paul 2, you better be pray'n", but this time there was a smile on my face.

Since that time, the Holy Father and I have stayed in touch daily. He has showed me that my life needed a little flip, because God has a plan of sheer goodness and the course He has set for me these past few years are part of that plan. I asked for Pope John Paul II's intervention to help me share the Gospel, and he stepped in and helped. It may not have been the help I was thinking he would provide, but it was tremendous help indeed.

I know my course is going to have a few more upside-down turns yet to come and for that reason, today my new ending to my daily Rosary as I call on my litany of saints to intercede for me is: "Saint John Paul II... You Better Be Pray'n!" … And be assured, there is a smile on my face as I utter those words!