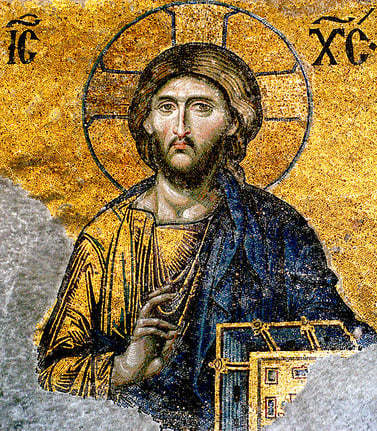 The prayer of Jesus is not an occasional petition that we direct to God. It is in fact our own deification. There would be no reason to stay all day in in conversation with God if it were simply a matter of addressing words to him. God hears very well, even to the noises of our bowels. There would be no need to pray day and night. Rather, the prayer consists before all in feeding upon Christ, the Lamb of God, and of drinking the Savior himself, by the invocation of his holy name. It is an intoxicating beverage, one that carries man into the heavens. It is the whole Christ whom we then absorb, and we become thus participants in God, reflecting--as Christ himself--the divine attributes.

This past Lent, I decided it was necessary to reboot my dwindling prayer life.

(Feel free to bask in the glow of my Good-Christian-Woman-ness for having such an extraordinary and pious notion).

I felt called to start by praying the Jesus prayer more consistently. Even though I’ve tried to integrate the Jesus prayer into my spiritual life prior to this, it never really stuck. It was only with reading The Way of a Pilgrim, a Russian spiritual classic about the Jesus prayer, that I started to have an idea of how this prayer should really be applied in my life, and suddenly I’m wondering why I didn’t do this in the first place. 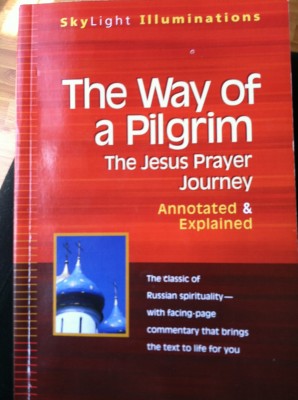 The Way of a Pilgrim follows the journey of a pilgrim (who saw that one coming?) in Russia as he seeks to understand the apostle Paul’s meaning when he says to “pray without ceasing” (1 Thessalonians 5:17).

Eventually, the pilgrim meets the man he calls his “starets” a Russian term for a spiritual father and elder monk, and the starets explains Paul’s meaning as such:

The unceasing, interior prayer of Jesus is the uninterrupted, continual calling upon of the divine Name of Jesus Christ, with the lips, the mind, and the heart, while calling to mind his constant presence and beseeching His mercy, during any activity with which one may be occupied, in all places, at all times, and even while sleeping. The words of this prayer are as follows: ‘Lord Jesus Christ, have mercy on me!’

Doesn’t that sound perfect for a busy mom? For a busy dad? For everyone really?

First of all, the prayer, though it is intended to be repeated as often as possible, is short: “Lord Jesus Christ, have mercy on me.” There are some variations on the wording between Eastern rites, but those variations simply add a few words to this basic phrase.

What I enjoy so much about having a short, repeated prayer is that it’s practical. I can say and repeat the Jesus prayer while I’m driving, showering, nursing, cleaning, changing diapers or whatever else without needing to count how many prayers I've said.

I also love that it helps prevent me from turning prayer into a “business meeting” with Jesus. Some of you probably already know what I mean by this, but allow me to explain: Sometimes with lengthy prayers that are meant to have a beginning and an end, I’m tempted to just get through the entire “agenda” as quickly as possible because I need to move on to the next activity or because I know my kid could wake up at any moment. While that kind of prayer is important and necessary, I really appreciate how the Jesus prayer helps me practice being focused on the present moment with the Lord because it’s not as though there is a prayer “agenda” or “quota” that I have to accomplish.

Eastern spirituality, specifically Hesychasm, teaches that there are other, more important effects of the Jesus prayer. For the Eastern Fathers and Mothers, praying the name of Jesus--in addition to praying the Church’s liturgies and receiving the sacraments--purifies us of complex logismoi, or thoughts that cause us to sin, and allow for the Holy Spirit to dwell in our hearts.

As Archidmandrite Aemilianos points out, this leads to our “deification,” or theosis ,in which we do not become deities ourselves but are intimately united with God, becoming one with him and “participants in God.”

(If you are interested in learning more than just this very basic explanation, Orthodox Spirituality by Metropolitan of Nafpaktos Hierotheos is an excellent, quick-reading source. Be forewarned that he’s somewhat harsh on Western spirituality in some areas. While I find his criticism enlightening, I think those of us in union with Rome need to respect a certain amount of validity to Western practices).

As far as my own experience goes, I can’t say I was able to adopt a practice as intense as the pilgrim, who began by saying the Jesus prayer 3000 and then later 6000 times a day until it was imprinted in his every moment even to the beating of his own heart. My approach was to pray the Jesus prayer simply as often as I could: while taking a shower, driving, doing dishes, nursing, as I tried to fall asleep at night, and even on the loo. (Hey, if I can talk to my girlfriend in the next stall while peeing, I can talk to Jesus, too). 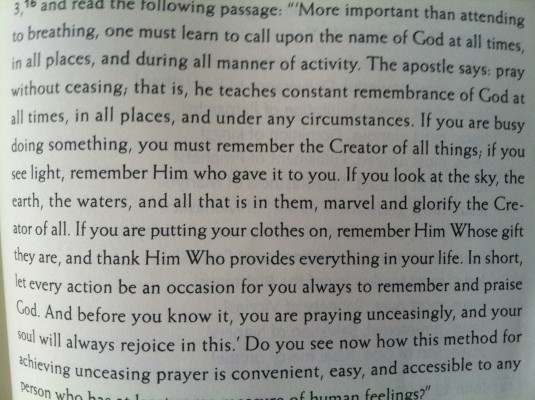 It's difficult to talk about the fruits of the Jesus prayer in my life just because of its intimacy and because so much hasn't been overly obvious or concrete, but I will say that I have had far more peace in the past three months since I started consistently practicing the Jesus prayer. And yes, I know that is the cliche testimony of Christians everywhere regarding their prayer life, but I suppose it’s cliche for a reason.

That peace is increasingly apparent to me now as my daughter is recovering from surgery, a surgery we’ve anticipated since she was born several months ago. Even though my sense of calm throughout the whole ordeal could probably be credited to a number of things, I feel like much is owed to the grace of God that the name of Jesus has given to me. I remember one point in particular where, fighting back tears and an exhaustion breakdown, I left my daughter to my husband and the nurses because, after one infiltrated IV and two failed pokes to insert a new IV, I didn’t think I could watch anymore. So I did some laps in the hallway and said the Jesus prayer as I walked. In that time, I experienced the strength of God’s uncreated grace, strength that helped me return to my husband and daughter with calm and with love rather than withdrawing into my own anxiety.

(And yes, my daughter is totally okay and doing great now! I know enough about us moms to know there will be concern from some of you at the mention of surgery. She’s whizzing down the road of recovery at lightning speed).

Of course, my words and my thoughts here on the Jesus prayer have hopefully piqued some interest or awareness, but they are not sufficient to to guide you thoroughly in your own practice of the Jesus prayer and Hesychastic spirituality. If you’re interested in practicing the Jesus prayer, I’d highly recommend The Way of a Pilgrim and The Philokalia, and I would specifically recommend the editions from the Skylight Illuminations series from Skylight Paths publishing. Both of these editions are abridged, and, trust me, you want the abridged edition to start off! They are also annotated, which is extremely helpful. I feel like Skylight Illuminations has done an excellent job of maintaining accuracy to Eastern Catholic spirituality in both books, but please remember that no translation is perfect. If you find something questionable or confusing, it’s best to ask a trustworthy priest or someone reasonably knowledgeable on the subject.