Book Review: The Way of Humility

The Way of Humility is a 100-page book, which contains meditations from Cardinal Bergoglio dating back to 2005. It is divided into two parts with the first part addressing the topics of Corruption and Sin and the second part addressing self-accusation. Each part consists a series of mini-meditations that span 2-3 pages and contain sub-topics of the larger topic. For example, there is a meditation on Making Comparisons in the larger topic of Corruption. 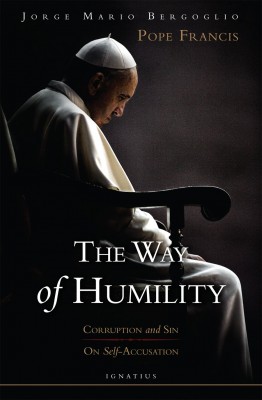 In the first part, Corruption and Sin, Cardinal Bergoglio begins by defining what corruption is and distinguishing it from sin. He states that one can be sinful without being corrupt, but that sin can eventually lead to corruption. He also explains characteristics of corruption, like self-containment and ignorance of one's own corruption.

Using a very blunt and easily understood metaphor, he states, "Corrupt people do not notice their own corruption. It is the same as when people have bad breath: they seldom realize it themselves. Other people smell it and need to tell them." He then goes on to explain about comparisons and judgment.

Using examples from the New Testament like the Publican and the Pharisee, we see how the Pharisee used both comparison and judgment and can see that this was not just a one-time sin, but a heart that had been corrupted.

I found his meditation on the corruption of the four groups of Jewish people in Jesus' day to be the most fascinating section of this part. In these brief pages, he brought to light how the Pharisees, Sadducees, Zealots, and even the Essenes had some form of corruption in their heart.

In the second part, On Self Accusation, Cardinal Bergoglio draws from reflections of St. Dorotheus of Gaza to illustrate his point. The meditations state that "Self-accusation requires uncommon courage in order to open the door to discovery of things we do not know about ourselves and let other people see beyond our facade."

Though this second part of the book seems more geared to religious, there is definitely truth in here for laity as well. Overall, this was a thought-provoking and soul-examining book. If you are looking to become humbler, read what Cardinal Bergoglio has to say.

Order The Way of Humility and support CatholicMom.com with your purchase.