Editor's note: Today we share a guest article by Judy Landrieu Klein, the author of Miracle Man. This book is the true story which played out in Judy's family. We thank her for sharing it here today! LMH

His face was radiant.  He had met the Lord.  Personally, face to face.  And after six weeks in a coma—brought on by a massive heart attack and multiple organ failure—my husband Bernie came back “from the dead” to tell me all about it.  Told in detail in my newly released book Miracle Man, Bernie’s story is nothing short of miraculous.  I watched for 87 days as God supernaturally intervened in Bernie’s life over and over again --personally and intimately demonstrating His incredible love and power while healing and sanctifying both of us. 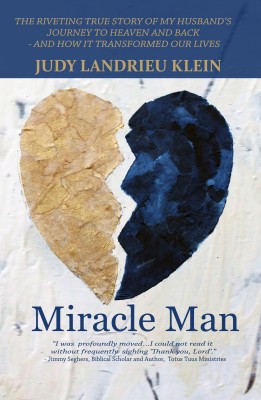 “I died and I clearly remember it,” Bernie began, his voice seeping a sacred silence.   “I saw my soul leave my body and was looking down on my body from above.”  After describing in detail how he saw the condition of his soul, as well as the things he had done in his life that were pleasing and not pleasing to God, Bernie shared this zinger:  “Judy, I followed the light all of the way to heaven.  And when I got there, I wasn’t permitted to enter.”

Bernie was then sent back by God to make amends for his life, but not before meeting terrifying creatures that beat him brutally as they screamed in his ears repeatedly, “We’re here to help you!!!”

Amazingly, in spite of his encounter with what he described as “creatures with tusks coming out of their heads,” Bernie’s overarching impression during what he termed “a near death experience” was one of unfathomable love.  So much so that he spent the last six weeks of his life telling me, “You have no idea how much God loves you…You have absolutely no idea how much God loves you!”  That from the lips of a man who had remained distant from God his entire life due, in large part, to his own wounded relationship with his earthly father. I had prayed fervently and incessantly for Bernie during the quarter century of our marriage, asking God to reveal Himself to my husband as a loving, merciful Father. As a Father to whom he could turn his face without the cloud of shame.

Bernie had been formed by shame, and it had left its mark on him.  He had known shame as an immigrant child who came to America and flunked kindergarten because he couldn’t speak a lick of English.  Shame followed him into adolescence, as he experienced the betrayal of an alcoholic father who made no secret of his many liaisons.  He had known the shame of a failed marriage and the shame, right before his heart attack, that he “no longer believed his own sales pitch.”  But the shame of believing that he had failed as a father had stung the most.

God saw the whole of the story, and His mercy sent Bernie back.  Back to make amends with his life, and yes, to be blessed, so that he could finally rest in peace.  Bernie’s life incarnated the truth that shame doesn’t have the last word, nor do sin and death.  They are in reality a portal, a door through which God can enter into human suffering--a crack in the human heart that can let God’s love in.

“How did you resolve it?” I asked spellbound, wondering how Bernie had freed himself from those dark forces.

“I surrendered to God,” he responded slowly and deliberately, announcing the secret to all deliverance.  “And when I did I was given food, air and water… and I had so much peace.”

“So much peace…” became his mantra as I watched him smiling shut-eyed and contented, enjoying what he called “fellowship with God.”   A fellowship of love that carried him at last into the arms of his heavenly Father and landed him squarely in His lap--only this time to stay forever, radiant with joy. 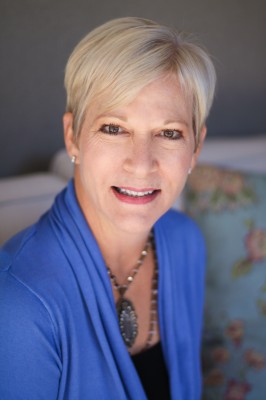 Judy Landrieu Klein is a Catholic theologian who proclaims God’s miraculous love and transforming power through a dynamic ministry that includes teaching, writing and public speaking.  A “revert” to Catholicism, Judy received a Master’s Degree in Theological Studies from the University of Dallas in the Jubilee Year 2000.   She has also carried out post-graduate doctoral studies in Bioethics at the Regina Apostolorum Pontifical Athanaeum in Rome.  Judy served as an adjunct professor of Theology at Our Lady of Holy Cross College in New Orleans for seven years, teaching “Morality and Science” and “Catholic Sexual Ethics.” She received the mandatum from Archbishop Alfred Hughes in 2004.
Judy is a published author whose books include  Living Water: Understanding The Gift Of New Life Through Baptism and  Sez Who: Why Church Authority Established By Christ Is So Important To Us Today. Her most recent book,  Miracle Man, chronicles her late husband Bernie’s near death experience and deathbed conversion following a massive heart attack in December 2008.
Judy served as co-host of Radio Maria’s Apologetics Live program for 4 1/2 years. Additionally, she has appeared on television on EWTN’s Women of Grace show and Focus Worldwide Television’s Focus program. She has also been the featured speaker at many faith-based events, including Magnificat Women’s Breakfasts, Legatus dinners and Theology on Tap meetings.
Judy is the founder of Memorare Ministries, which is dedicated to evangelization, teaching the Catholic faith and sharing the good news that miracles are possible through faith in Jesus Christ. Judy was widowed in 2009 after her husband of 24 years experienced a massive heart attack. She married Dr. Mark Gelis, whom she met in the adoration chapel, in 2012.   She is the mother of five wonderful children and five beautiful grandchildren and lives in Mandeville LA.