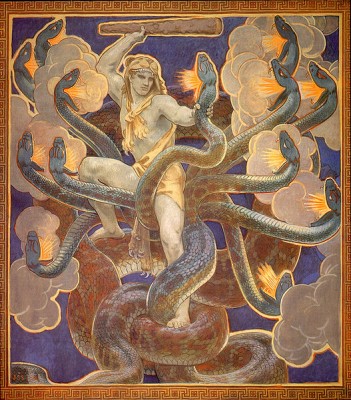 There's a monster whose been lurking on my internet connection, and her name is Mythical Mom.  Just like the Bad Tigers we used to spray for every night before my preschooler went to bed, Mythical Mom isn't a person you've ever met -- she's more like a hydra, a many-headed Mom-creature.  But you may have spent some time thinking about her, and that's how she gets her power.  It's time to slay that beast once and for all.

Who is Mythical Mom?

Every now and then a mother of preschoolers says something to me like, "I wish I could spend a day following you around, to see how you do it all."  After I recover from the burst of manic laughter, I gently explain that "me" and "doing it all" don't belong in the same sentence.  The poor lady's been a victim of Mythical Mom.   She has taken the very few facts she knows about me:

And then she's filled in all the blanks with pictures cut out from magazines:

Mythical Mom is the warped product of charitable thinking (it doesn't do to assume your new acquaintance is a lousy housekeeper until you have hard evidence it's so) combined with broad experience.  You know this mother who runs her own business, that mother who smocks heirloom first communion dresses, and the other mother who tutors calculus.  You meld them all together in your imagination, never minding that it's physically impossible to hand sew and operate a mechanical pencil at the same time.  Mythical Mom does calculus in her head.

Why does such an astonishing creature need to be slain?  Because she'll destroy your life.

How many times have I heard a rant  from an over-worked committee leader like that goes like this:

I can't believe Mrs. Cupcake won't help with a few phone calls.  What does she even have to do with all her time?  If you saw her Facebook profile, you'd see she has plenty of time for baking birthday cakes and folding origami.  Why can't she do one little thing for someone else?  And have you seen the car she drives?  It's not like she's got a job or anything . . .

We get a few glimpses of Mrs. C with her big smile and her three lovely daughters with the matching bows in their hair, and we fill in all kinds of blanks.  Must have lots of free time.  Doesn't work, has nice things, must have plenty of money.  Mythical Mom thinking doesn't consider that maybe there's a reason Mrs. C. can't volunteer to help on the committee.  That maybe the reason Mrs. C. always looks so cute and crafty is that those little projects are her one stress-reliever in a hard, busy life.  That the thought of making one more phone call, after all she has to do during the day that you never see, makes her want to scream.  Mythical Mom always has a smile, but Mrs. C may well be icing the cramps in her cheeks after a day of putting on cheerfulness so that other people don't have to be pulled down by her problems.

Mr. Love gives Mrs. L. a movie-worthy kiss when he drops her off at the ladies' Bible study.  Mrs. L can't stay all evening -- they are going out for a stroll in the moonlight, just the two of them, after Mr. L drops the children off at Grandma's house.  Mrs. L breezes into the kitchen, radiant:

Aren't these flowers beautiful?  I'll just help myself to a jelly jar and a little water if you don't mind?  Oh, you can keep the flowers!  He gave me a dozen roses this morning!  This was just a little pick-me-up because he knew I'd had a long day.

The real Mrs. L married a man with a flair for romance, and all the weaknesses and imperfections of any guy you've ever met.  Mythical Mom not only gets flowers and kisses and strolls in the moonlight, but the lawn is always mowed, the budget is never blown, and the children listen to Mr. Mythical the first time, without him having to raise his voice.  Also he can fix anything, loves doing dishes, and pouts if he doesn't get to bring Mrs. Mythical breakfast in bed every Sunday morning.  Homemade omelets.  With homemade baguette, original French recipe.

Real women don't have enchanted lives.  Mythical Mom will persuade you that somehow your normal marriage, your normal job, your normal family, are all terribly short of the mark.   Get her out of your marriage, fast, because she's the original homewrecker.

How can you ever be good enough, when Mythical Mom is fit, beautiful, talented, intelligent, kind, holy, and always, always impeccably organized? After all, you've seen her at her best . . . the rest must be just as good, right?  You fill in the question marks surrounding that charming family sitting across the aisle at Mass on Sunday, and it's quickly apparent that little ol' you is dreadfully inadequate.

You can't compete with a mythical beast.  You'll never be smart enough, virtuous enough, beautiful enough, to equal the combined wonders of twenty women wrapped into one imagination-gilded package.

When Mythical Mom is in charge, you'll always feel like the one lady in the mother's group who doesn't have it together. The one who doesn't fit in. The outsider.  The also-ran.

Kick her out.  There are bunches of real moms you need to know.  Moms with egregious faults, annoying habits, and children who sometimes shove each other in the brawl after Mass about who gets to light the first candle at the Holy Family statue.

Spend time with those moms.  They need to know you aren't the mythical beast either.