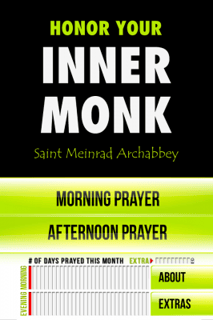 Often, the idea of praying daily seems a little overwhelming to people, especially if someone starts off suggesting the Divine Office — even if  only  Morning and Evening Prayers are suggested. If you're not already praying, the idea of something long and complicated being added to a day that already seems packed with activity can make a person want to give up before they even get started.

Enter the Benedictine monks of St. Meinrad's Archabbey in Kentucky! I started following their Twitter feed because a friend of ours entered their seminary (he'll be ordained next January!), and discovered their new app through the social networking site. 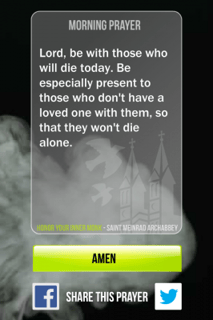 If you're worried about the length of a morning or afternoon prayer, fear not! The daily prayers offered are short and sweet. When you've prayed, just click the button indicating so, and you get a little filled-in box that helps keep track of how many days you've prayed so far. There are about 30 days to fill your boxes (with a row for morning and a row for afternoon), plus a small row of boxes labeled "Extra."

When you click on the "Extras" button, you're brought to a screen that gives you the option to read an abbreviated form of St. Benedict's rule, select from traditional Catholic prayers (and get those "Extra" boxes filled in!), or listen to the Saint Meinrad monks chant some beautiful Gregorian hymns. 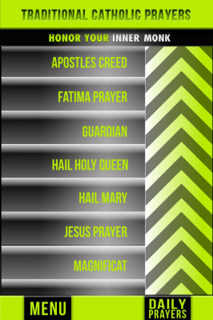 Some of the traditional prayers available

The traditional prayers include the Apostles' Creed; the Hail, Holy Queen; the Hail Mary; the Magnificat; and more. It's a great tool to pull up prayers to learn (or to teach someone else). 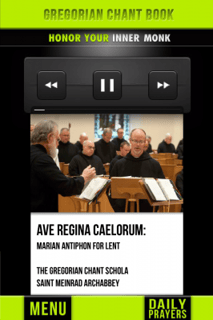 (I think my friend is in this picture!)

The Honor Your Inner Monk app is free in the App Store and the Google Play store, and is a great tool for someone who wants to improve their prayer life, but isn't sure how to start (or feels overwhelmed by the possibilities).

Putting It Out There: Think Before You Sync
Read
Podcast Highlight: Catholic Vitamins
Read
Praying as a Monk through an App: Honor Your Inner Monk
Read