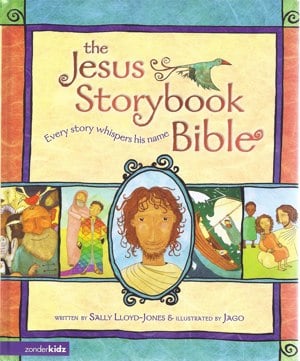 I’ve read a lot of children’s Bibles to my kids over the years.

It was part of my plan to make them Bible-readers as they grew up.

I continually supplied them with different children’s story Bibles. When they finished one, they’d get another right away.

It kept them from getting bored.

But there was Bible we went back to many times. It was on a different level, and did almost everything right.

That’s the one I want to talk to you about today.

What a Story Bible Should Be

How do you think of the Bible?

Do you think of it as a book? A collection of stories? God's library, perhaps?

That’s great, but those viewpoints will not enchant your child and capture their imagination.

“The Bible is most of all a story. It’s an adventure story about a young Hero who comes from a far country to win back his lost treasure. It’s a love story about a brave Prince who leaves his palace, his throne -- everything -- to rescue the one he loves. It’s like the most wonderful of fairy tales that has come true in real life! You see, the best thing about this Story is -- it’s true. There are lots of stories in the Bible, but all the stories are telling one Big Story. The Story of how God loves his children and comes to rescue them.”

This is what the Jesus Storybook Bible says the Bible is about…and it’s exactly right. It’s an adventure story, the quintessential story, the "hero’s journey" come true. That’s because it’s God’s story and our story…the story of everything.

The thing about most children’s Bibles is: they’re a collection of stories that all have an ending. In fact, the Bible is full of stories that have an endings, and come off like separate, individual stories. So why are they all together in one book? It’s hard to get a sense. We’re tempted to think they don’t fit together…but they do.

Every Story Whispers His Name

The subtitle of the Jesus Storybook Bible is “Every Story Whispers His Name,” and that’s just what every story does.

Rather than present the Bible as a collection of random stories, individual stories, the Jesus Storybook Bible ties them together into one big overarching story with a central, unifying theme--Jesus.

Every story really does whisper HIS name. In the Old Testament, the narrative tells you how the stories are foreshadowing Jesus. In the New Testament, it makes plain how Christ’s ministry fulfills the stories that came before.

That’s a great message…the right message to get to your kids about the Bible.

There are some other features that I really love about this book too.

It is beautifully written. The style is engaging, humorous, and sometimes heart-rending. My favorite passage comes from the story of the Fall.

“You see, sin had come into God’s perfect world. And it would never leave. God’s children would be always running away from him and hiding in the dark. Their hearts would break now, and never work properly again. God couldn’t let his children live forever, not in such pain, not without him. There was only one way to protect them.

‘You will have to leave the garden now,’ God told his children, his eyes filling with tears. ‘This is no longer your true home, it’s not the place for you anymore.

But before they left the garden, God…gently clothed them and then he sent them away on a long, long journey—out of the garden, out of their home. Well, in another story, it would all be over and that would have been…The End.

But not in this Story. God loved his children too much to let the story end there. Even though he know he would suffer, God had a plan—a magnificent dream. One day, he would get his children back.”

Isn’t that awesome? I kid you not, I've read this to adults and they've been moved by it.

The artwork is fantastic too. Slightly quirky and highly stylized, it makes beautiful use of the space. Take a look at this double spread. Obviously, you have to turn the book vertical to read it. 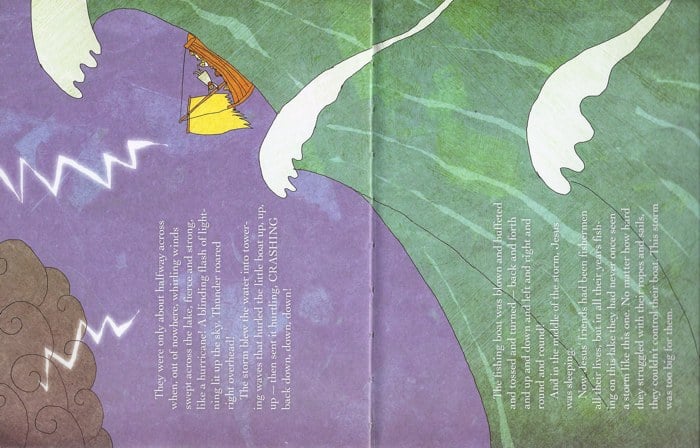 And the use of perspective here in the scene of Jesus in the Garden of Gethsemane. 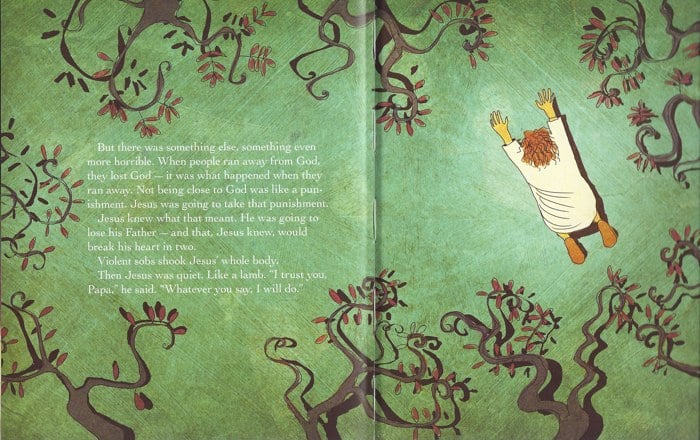 Unfortunately, this is not a Catholic Bible. So there are some things you have to look out for.

At the Last Supper Jesus says of the Eucharist, “This is like my body.” You’ll have to correct that when you read or point out the differences in Catholic belief.

It also hints at substitution theory in the story of the Crucifixion.

"The full force of the storm of God's fierce anger at sin was coming down. On his own Son. Instead of his people."

That's a decidedly Protestant viewpoint of atonement but is hardly noticeable at this age. Just omit that sentence.

Overall, this is an excellent children's Bible, one of the best I've ever seen. Taking note of those two exceptions, I'd say it's almost perfect. So get this book, and enchant your children with the Story of God's loving rescue. You'll love it and they will too.

Have you used this Bible with your kids? What was your experience with it? Do you have a favorite children's Bible? Tell me about it in the comments below.