My unexpected miracle healing (part three): healing inside and out 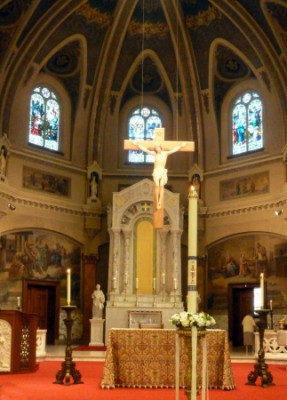 When I walked out of Holy Family church that Sunday after having my throat blessed (see previous post), I had no idea what to expect. Over the past four years I had come to accept that my loss of voice was permanent.

That loss became a part of who I was.

Yet the blessing moved me, especially when Fr. Steve said my name. I cried while leaving the church, surprised yet again at the depth of my grief.

I still missed my voice, but I did not miss the old life that was attached to that voice. I had moved on to a new life, beyond music into writing, a life of creativity that was new, exciting and fulfilling. Music, on the other hand, was old and stale and I thought, dead.

God had other ideas. 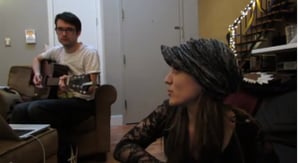 My son the musician

A few days after the blessing my son, also a musician, texted me about the songs I had written when I was his age. I had a large catalog, all recorded on cassette tapes. He wanted me to digitize the collection and send it to him via the computer.

I am in my late fifties; these songs were written when I was in high schoo and college, and through my young adulthood. They were often autobiographical in nature and full of the angst of youth. I cringed at the thought of even listening to them.

But he urged me on saying, “Mom, it’s your legacy!” How could I resist?

Through this intermediary, the healing began.

I listened to the songs before digitizing them and found that they weren’t so bad after all. The exercise awoke old memories of why I had loved music in the first place. It reminded me of the wonder of listening to Joni Mitchell’s classic “Blue” and how her lyrics had pierced my soul. Mitchell was the icon of confessional singer/songwriters and I crafted my songs after her model.

I began to see a thread of connection between the lyrics I wrote forty years ago, the writing I used to do as a kid and the writing that I am doing now, and realized that in fact, I had always been a writer at heart.

The pieces of the puzzle of my creative life started to come together.

It acted as a soothing balm. I began to put my arms around my creativity as if to say, “Welcome home.”

For years I had been pushing music away because it hurt too much to be near it. I had not only lost my voice but my soul as a musician. Thanks to that blessing, and my son, I found my way back to the self that had gone astray.

Entering Holy Family church two weeks later for mass, it struck me like a thunderbolt: I had been healed! I couldn’t wait to tell Father Steve. All during the mass my heart overflowed with gratitude. I understood for the first time the many layers of healing.

God heals the whole person, not just the symptoms. He heals us from the inside out.

When the paralytic man was lowered down from the ceiling by his four friends as told in Mark 2:1-12, Jesus first forgave his sins. He healed the inner man because He sensed this was the healing most needed. In ancient times, sin was thought to be the reason for physical troubles. Jesus relieved this man of that burden: the paralysis was not his fault. He then healed him physically.

He did that for me too.

I was free from the emotional paralysis that had locked away my love of music. All the grief, all the anger melted away. Even though my singing voice was not restored I felt whole again. I was back to being fifteen, playing the guitar and pouring my heart into my very first composition.

But the healing was not complete.

In the weeks that followed I began to notice that it became easier to sing the hymns during mass. Although my throat still hurt when I sang, the notes were coming out stronger and clearer, like they used to.

Each week when I went to mass, I pushed myself a little more each time. It began to feel good to sing again. One week I took the long way home after mass so I could test my voice on some of the most challenging songs of my repertoire. 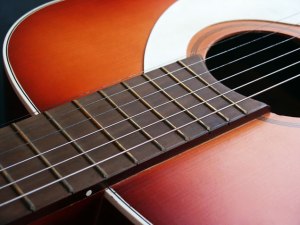 When I got home I belted out “Amazing Grace” just as I had recorded it and scared the cat with the volume! Buoyed, I pulled out my guitar and sang song after song. Yes, yes, I could sing again!

This the recording I had made a few years ago of "Amazing Grace":

I could sing again. The healing was complete.

Now I knew how the sick felt when they were healed by the touch of the Master’s hand. Deep gratitude brimming over. An overwhelming desire to do a happy dance! The urge to rush out into the street and shout to the neighbors, “I’ve been healed!”

Another urge overtook me: the need to visit my church and kneel in front of the tabernacle to say thanks. I did that a few times, just pulling off the road for a moment to go into the church, kneel there and caress the tabernacle where the body of Christ resides in the form of bread and just saying over and over:

There is still the acid reflux to deal with and I have to take care that I don’t strain my newfound voice as the stamina is not what it was. I won’t be singing in public except on rare occasions. Music is now a private affair with writing taking center stage.

But I can sing to God with a new voice. I can pray the way I love best.

How has God healed you? What is your healing story?