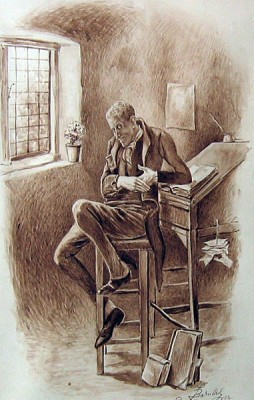 Uriah Heep, from David Copperfield, is one of Charles Dickens’s most wicked characters, definitely a villain; a greedy clerk and money-lender, who fawns his way through David Copperfield and blackmails his way to success. The character has as little pigment in his body as he does decency, though he makes frequent references to his own “‘umbleness.” Heep is an evil character, a blackmailer, with no empathy for others. To read about him is to make your skin crawl!

We know from the outset he’s going to be evil. “[He] had hardly any eyebrows,” says the boy, David, “and no eyelashes, and eyes of a red-brown, so unsheltered and unshaded, that I remember wondering how he went to sleep.” Uriah has a pale face, red eyes , and “a long, lank, skeleton hand, which particularly attracted my attention”

The cold, long, white hands of Uriah Heep stand in for the inhumanity of the rest of him: he is like a dead thing, totally immune to any kind of human warmth or sympathy. David is only 11 at this point, but even he is wise enough to see that Uriah Heep isn’t trustworthy.

In real life, there are certainly real life villains–particular villains in each of our lives. Are we wise enough to know who they are? How do we recognize someone who would do us wrong, or put us in danger? Most of the time, they don’t look like Uriah Heep, but like everyone else we know.

Well, why is that? Why does a person capable of committing evil look like the rest of us?

Because he is like the rest of us–and sometimes he/she is US.

So, can we recognize evil in ourselves as easily as we can in others? Can we honestly look at ourselves? Of course, not; at least not easily. And that is what often makes us smug Christians, even hypocritical Christians.

The music video is by a band from my youth, coincidentally named, Uriah Heep. You’ll have to hang with the introductory and ending instrumentals–that was usual for heavy metal in the 1970′s. And of course, there are the psychedelics, but the message is on the mark.

Family Game Night: Villainous
Read
On Becoming Dolores Umbridge
Read
If Catholic Adventure Has a Name, It Must Be McCracken
Read