Saint Peter is one of the latest DVD movies from Ignatius Press. They have done a great job releasing movies that Catholic want to see, including some on recent popes like John Paul II, John Paul I, Pius XII, and on saints and future saints like St. Augustine and Blessed Mother Teresa. These movies usually have an established actor or actress as the leading role, which helps carry the film and give it the kind of credible performance that separates it from movies like Flywheel or Facing the Giants. John Paul II had Jon Voigt and Cary Elwes; Pius XII had James Cromwell; and Saint Peter has Omar Sharif. 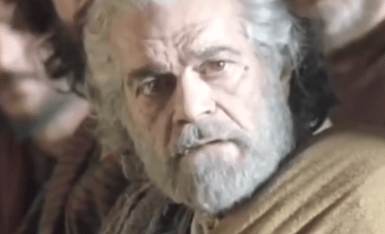 Unlike other movies, which use the Gospel accounts as their focus, Saint Peter draws primarily from the Acts of the Apostles. Jesus has just been crucified, resurrected, and ascended into Heaven. With growing persecution from Jews and Romans, the followers of Jesus need a leader, and that man is Peter. Peter faces constant doubt and feelings of inadequacy. He was the man who betrayed Jesus. What makes him worthy to lead now that Jesus is gone? We see this struggle time and time again in the movie. Sometimes, he needs encouragement from others like Mary or John. Other times, he thinks back to words Jesus said to him for guidance. These flashbacks add a nice Gospel element to the movie, and present an interesting juxtaposition of Peter in Acts with Peter in the Gospels.

No biblical movie is going to be 100% like reading the Bible. There will be parts you love, parts you hate, and parts that you love and hate. I will try to touch on each of these. One part I liked about the movie was how closely the dialogue followed Scripture. There were times you felt like you could just read along with Acts of the Apostles. I also loved Omar Sharif. At first, I was like, "Why is Peter so old?" Thankfully, I love iconography so when looking at icons of Peter, I was quickly reminded that he indeed was old, as he is always pictured with grey hair and beard. Some people I watched this movie with didn't like how "weak" Peter came off in the movie, so I reminded them of this G.K. Chesterton quote:

“When Christ at a symbolic moment was establishing His great society, He chose for its cornerstone neither the brilliant Paul nor the mystic John, but a shuffler, a snob, a coward – in a word, a man. And upon this rock He has built His Church, and the gates of Hell have not prevailed against it. All the empires and the kingdoms have failed, because of this inherent and continual weakness, that they were founded by strong men and upon strong men. But this one thing, the historic Christian Church, was founded on a weak man, and for that reason it is indestructible. For no chain is stronger than its weakest link.”

What I didn't like in the movie were some of the liberties taken with the story. There was a scene in the market where Jesus appeared to Peter that was completely fictitious and unnecessary. And without giving away too much, the family of a minor figure from Acts, Cornelius, felt like storyline for the sake of making a storyline. You're not going to like every actor in a movie, and this one was no different. In fact, the minor characters are what I'm most conflicted about. Some did outstanding jobs, and others not so much. Paul, John, and Jesus's mother, Mary were both superb and looked the part. Mary Magdalene looked a little too modern. Matthias came off a bit like a jerk with his adamant disdain for Gentiles. And I'll never understand why Jesus has to have blue eyes.

Overall, this was a very good movie. Was it perfect? No, but like I said earlier, no movie ever really is. It was solid though, and emphasized Peter the man, Peter the leader, the Early Church, and the Eucharist. I would recommend it to everyone, but warn that if you watch it with children you might have to have them close their eyes for some violence (gladiator fights) and ultimately Peter's death on the cross. For a preview check out the video below. If you are interested in watching, but not owning the movie, check out Ignatius Press' new streaming program by clicking here. It's like Catholic Netflix.