Editor's Note: As the world's attention fixes on the drama of the World Cup in Brazil, CRS reflects about the global game that flourishes in even the poorest reaches of the world, how it lifts up and unifies communities in even the most adverse conditions.  Twelve countries where CRS works are 2014 World Cup competitors, so we're paying close attention.

At the same time, the statistic that we confront every day is that one in seven persons worldwide live in extreme poverty, and so we've started the #KickPoverty Campaign, hoping that maybe a bit of that global attention can be given to the scandal that is the fate of the world's poor, many of whom live in the same countries that these athletes are playing for.

This article describes just one case where our programming intersects with the soccer culture that is truly everywhere. 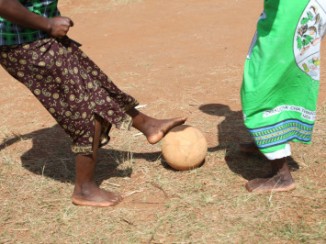 Members of a WALA care support group play soccer outside the community center in their village Tholo, Malawi. The group uses soccer as a fun way to promote key messages about health, hygiene and nutrition to the greater community. Photo by Sara A. Fajardo/CRS

“The ball goes to hygiene!” yells the announcer in Chichewa. “Hygiene is critical to stop the spread of disease, but look here proteins are right on her tail!” A crowd gathers as women dressed in traditional Chitenge skirts scramble to get an angle on the earth colored ball that is at the center of their soccer match. Each of the 12 players has been given a name ranging from the basic food groups, to conservation agriculture, that spectators now chant as the ball whizzes from foot to foot and goalies dive towards to keep the points scored close to zero.

It’s mid-day in Tholo, Malawi, the group has just closed a meeting on communal savings. I’ve attended countless similar meetings that usually break with a song and a prayer, but this group is different. This group wants to reinforce to others in the community what they’ve been taught through sports.

Like any professional match they begin by announcing the line-up, the players run on to the grassy field waving their arms and taunting the competition. Soon after the game begins. The crowd is riveted. As am I. It’s the first time I’ve ever witnessed such a creative way of spreading the lessons CRS has taught.

A woman in a red and white striped tanks runs by, “handwashing has the ball,” shouts the baritone announcer, “handwashing wants you to know to always use soap, and there she is coming in on……. GOOOOOOAAALLL!” The crowd erupts, the players whoop and do brief victory dances.

The final score is 2-1. The teams will face off again the following week. Their goal is to have fun while continue to spread critical messages that will improve the lives of their community. Well, that, and saving up enough money in their savings group to buy some official jerseys for each player.

Watch (and share!) this video below to learn more about the #KickPoverty Campaign.  To view in Spanish, click here. Below, Bosnia-Herzegovina star Vedad Ibišević talks with CRS about how his often-divided country is finding unity, through sports and through reaching out to one another in times of adversity.