They Call Themselves ‘Catholics’

The post you're about to read is short, but it says a lot. The Muslim woman in this story lives in an isolated part of Ethiopia. It's so isolated that she's never heard the word "Catholic." Nor does she know the meaning of it.

While she has no idea what a Catholic is, she thanks God for them because they've given her clean water. And on the other side of the world, the vast majority of Catholics who support Catholic Relief Services probably have no idea they helped this woman and countless others like her.

She didn't know what a Catholic was and the Catholics didn't know they were helping her. Read the full story to understand how there is no judgment or stereotypes, just a woman who is grateful. 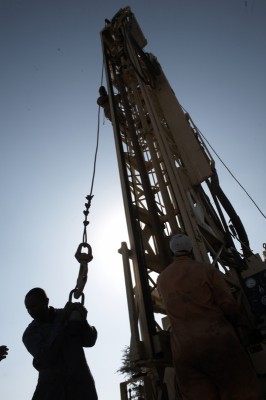 Here a bore hole is being created, with the rig boring down to a depth of approximately 160 meters to the water table. Photo by Andrew McConnell/CRS.

CRS donated several drilling rigs to the Ethiopian Catholic Church to tap deep groundwater. Our partner, the Hararghe Catholic Secretariat, used one of the rigs to drill a borehole in Dire Dawa, an arid eastern district in Ethiopia. The borehole now provides 2,400 households with access to clean water. Recently, the Secretary General of the Ethiopian Catholic Secretariat Abba Hagos Hayish toured some of the communities benefitting from this work.

“What do you think of this water project?” asked Abba Hagos of a Muslim woman filling a 5-gallon jug with water from one of the system’s taps.

“It’s wonderful!” she exclaimed. “Look how clean this water is. Our life has changed.”

“Do you know who is responsible for this project?” Abba Hagos inquired. The woman put down her water jug and looked at him with a slightly puzzled expression.

“They call themselves Catholics,” she said, emphasizing the strange word at the end of her sentence. “I’m not sure exactly what that means, but we give thanks to God for their work.”

About 80 percent of Ethiopia’s nearly 80 million people live in rural areas. Of these, fewer than 15 percent have access to safe water.

For more information about Catholic Relief Services' work in Ethiopia, sign up for the newsletter.