When my girls were little, we found these cool Road Trip Bingo cards at Cracker Barrel. We stocked up and wound up with half a dozen of these cards to keep everyone amused while we drove to whatever vacation we were taking. Sometimes, they'd even pull them out as we drove around town on errand days. 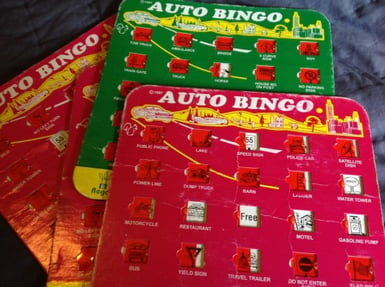 But after a while, they started getting dropped on the floor and stepped on in the back of the minivan, and the little windows started to stick (or fall out!).

There would be fights breaking out over who had the bunny card and who had the squirrel card.

And eventually, they did outgrow them, preferring a book or their iPod full of music and movies. 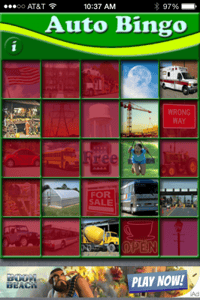 But Auto Bingo is back, with a technological twist!

Auto Bingo is a free app that lets you play on randomly generated boards right on your iDevice. You can choose to play a regular Bingo game or Blackout Bingo, where you fill your entire board.

And there is enough variety to be able to play on the highways or the byways or even just driving around town.

My girls and I played while we were on our way back and forth from their grandparents' vacation in Tennessee, and we thought it was a great update to the old game.

To cover your space, you tap the picture, then slide your finger over the space, like you're sliding those old red covers over the picture. 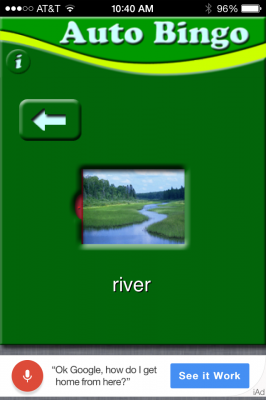 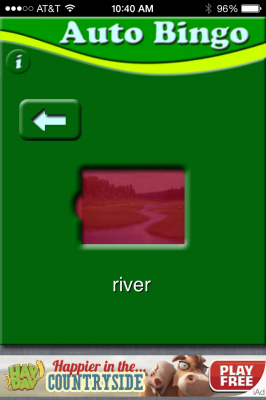 When you select a picture, the label appears on the screen, just in case you can't figure out what it is. The picture for lake/pond look a lot like the one for river on the little screen.

If you're traveling with iPads, though, you can slide the red cover on the main screen; tapping the picture reveals the name of what you're looking for. And the iPad version isn't just a blown-up iPod app, but its own version. 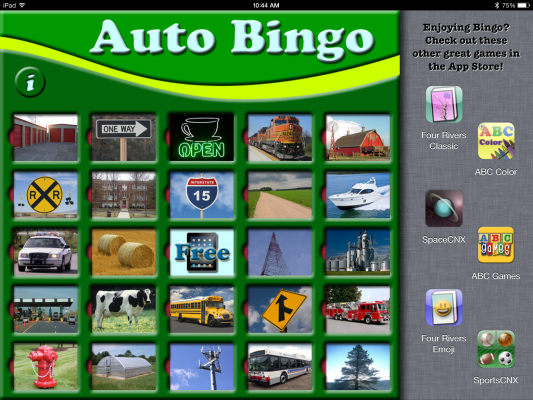 The app works without Wi-Fi, so you can download it and not worry about refreshing your virtual cards on the road. You can even play in other languages: select from Arabic, English, French, Japanese, Portuguese, or Spanish. Both the iPod/iPhone and the iPad versions are free (ad-supported).