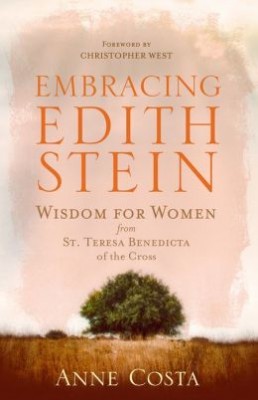 Anne Costa’s book, Embracing Edith Stein, was my traveling companion on my recent trip to Missouri. I wish I had spent more than a few hours with the book. I fully intend to revisit her someday when I have several days to digest her teachings.

Anyone who has followed my blog for any length of time knows that I love Edith Stein. I think that she is the mother of the New Feminism whose writings are largely untapped gold. Her teachings currently lives primarily though the voice of John Paul II. As Costa says herself:

Edith’s Essays on Women seem to be so directly foundational to the writings and works of Pope John Paul II’s Theology of the Body that the two are like inseparable companions. Together, these two intellectual and spiritual powerhouses have transformed our understanding of human dignity in the context of a worldwide culture that is hell-bent on self-destruction. They are, in the fullest sense of the words, prophets of life who have provided us with a body of knowledge that can lead to a rich and transcendent self-understanding that calls upon women to embrace our potential and exercise our responsibility to “aid humanity in not falling.” – pg. 81

Someday, I hope and pray that her teachings live and breathe through their own right.

This book is an admirable attempt to do just that. Costa makes Edith Stein’s work on the dignity of women digestible for a non-academic audience. She introduces you to Edith Stein’s life and thought. She then breaks down for you the four traits that are part of the feminine genius according to Edith Stein. Each chapter concludes with reflective questions which make this book ideal for personal or group study.

But enough about the mechanics, Edith Stein, through Anne Costa’s book, points us to the way to become holier, more Christ-like women fulfilling our vocations in this fallen world. First and foremost, we need to be open to God and His will. If we are open to God, God will do all of the rest. We are to be like Mary:

Women are uniquely called to receive Christ and bring him into the world, as Mary did.- pg. 51

If you are like me, you may not initially like that example. Like the lyrics of the hymn, “Gentle woman, quiet light…” You think Mary and you think of the weak, meek woman who is a doormat. But Mary wasn’t weak. Think about it: Mary could have been stoned to death for being pregnant out-of-wedlock. Mary followed her Son, who everyone thought was crazy, all the way to His death. She watched her Son die. This is not the story of a meek woman. Yes, she was humble in following her Lord, but she was nobody’s doormat.

Why do we need Edith Stein in today’s world? Just as Mary was a woman from 2000 years ago in Palestine, Stein was a woman 70 years ago in Nazi Germany. What does either of them have to say for women in the United States in 2014?

Simply put: We need her wisdom and example. The world is in desperate need of women who understand their inherent value and dignity; faith-filled women who are prepared to shape the world and influence the direction of humanity by who they are. As Edith states, “[God] has called women in all times to the most intimate union with Him: they are to be emissaries of his love, proclaimers of His will to kings and popes, and forerunners of His Kingdom in the hearts of men…[It] is the most sublime vocation which has been given, and whoever sees this way open before her will yearn for no other way.” -pg. 93

Yup, that pretty much covers it.

Bethanie Ryan is a work-at-home mother of a tall, skinny, extremely energetic toddler. She blogs and runs social media for the John Paul II Center for Women. She spends what little free time she has volunteering as Campus Outreach Coordinator for Feminists for Life and writing for a number of different websites. She is a pro-life feminist activist. She's a convert to Catholicism and a recent theology school grad. She has a background in nursing and is trained as a hospital/hospice chaplain. That background knowledge colors pretty much everything she does. Her main blog is True Dignity of Women.

Book Notes: Embracing Edith Stein
Read
Behold, Your Mother: A Teen's Reflections on the Rosary
Read
The Word is Very Near You
Read