Editor's note: Congratulations to our own Marilee Haynes, author of the wonderful book a.k.a. genius. Marilee Haynes was awarded the Catholic Writers Guild's highest recognition. Marilee, we are blessed to have you as a part of our family! Lisa 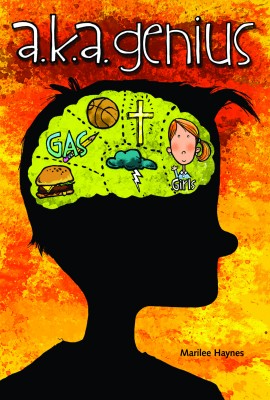 July 31, 2014 (Boston) —Pauline Books & Media is proud to announce that the middle-grade novel, a.k.a. genius by Marilee Haynes received the Catholic Arts and Letters Award (CALA) for Children’s Fiction from the Catholic Writers Guild at the Catholic Marketing Network 2014 Trade Show today in Chicago, Illinois.

Haynes also received a second-place award in the Teen and Young Adult category from the Catholic Press Association at the Catholic Media Conference in June in Charlotte, NC for her a.k.a. genius. The sequel to this award-winning book, Genius Under Construction, was published by Pauline Books & Media in March 2014.

In a.k.a. genius, Gabe Carpenter, a seventh grade student at St. Jude Middle School, is surprised to learn that the results of his standardized testing classify him as a genius. Considering the fact that he can’t open his own locker, becomes completely tongue-tied around his sister’s friend Becca and has a father who wishes his son were a basketball star instead of a science nerd, Gabe is having a hard time dealing with his new identity. After his second-best friend stops speaking to him and he is placed in an advanced class, Gabe starts to feel that Saint Jude is the only one who can help.

In a phone interview after the CALA ceremony, author Haynes said, “I was beyond thrilled to hear about the award and think Gabe, the genius himself, would be just as excited. I hope this recognition helps a.k.a. genius find even more young readers. I promise they’ll like him!”

Purchase a.k.a. genius and support CatholicMom.com with your order