Of Mice and Man in Zambia, and World-Changing Vision

A tall, wiry missionary visited a Chicago suburban parish from Zambia in 2013. Fr. Bwezani described his seven scattered missions in the Luangwa Valley in the wilds of eastern Zambia. Here, crocodiles, poisonous snakes and boars frequently attack and kill villagers. Father said it was common to suddenly face a lion in one’s path.

I raised my hand and asked his strategy in this situation. He shrugged and said, “Trust in God’s grace.”

Fr. Bwezani is lean, earnest, and solemn…but when he smiles, it lights up his face. His cotton shirt was worn thin, faded in back.

But his poverty might best be illustrated by his daily cuisine. He showed us a picture of his typical meal: cornmeal and water gruel, a mound of fermented cabbage and a simple tomato sauce. For protein? Fr. Bwezani ate mice: abundant and cheap.

Father lacked transportation to his scattered missions, so a friend of his with vision in the Chicago area launched a campaign.  Driving on Zambia’s rutted, unpaved roads can be torture, especially in rainy season. Routes are often little more than matted, circuitous trails. To reach one mission for Easter vigil, for example, Fr. Bwezani traversed 165 miles through tundra just to reach a location 53 miles away.

The missionary showed pictures of his borrowed vehicle stuck in mud up to the chassis. A whole team took seven hours to dig and push the vehicle free.

Having a reliable vehicle to navigate rough terrain would help ease the difficulty. So Father’s Chicago-area helper put word out to family and friends, and through a Facebook “Fundly” campaign, raised enough donations for a new vehicle.

I remember at times, people wondered if the campaign would raise enough funds. But friends told friends, and the goal was even surpassed by more than $400. Later, through word of mouth, a generous donation of Rosaries was also sent back to Zambia with Fr. Bwezani. Villagers wear these blessed rosaries as protection against rampant Satanic worship in the region. 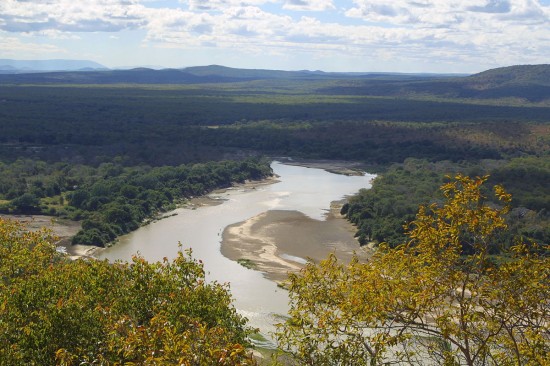 That vision of a new truck and Rosaries, shared by cross-continental friends, led to a Third-World missionary being blessed by First–World generosity.

Even if the truck never came to this Fr. Bwezani, however, and no one listened to his pleas for aid, his vision of serving the most remote peoples of Zambia would remain. He would continue hitching rides, getting stranded on the road, risking death by lion attack. The vision that compels him, that keeps him moving through both monsoon and drought, is a commission he can’t ignore. When people embrace that call to spread Christ to all nations, they are led on by supernatural conviction and drive.

Bishop George Cosmas Zumaile Lungu, of Fr. Bwezani’s diocese of Chipata, said it well, in a letter to his priests: “Do not be intimidated by anyone. You were ordained to preach the Gospel and this must be done even in the face of persecution. In doing so, you will be carrying out the prophetic role of being the conscience of society. As Jesus said, “Do not be afraid of those who kill the body but cannot kill the soul. Rather, be afraid of the One who can destroy both Soul and body in Gehena.” Matt. 10:28. No one shall be allowed to silence our priests.”

Bishop Lungu wrote this message August, 2012, after one of his priests was deported. The priest’s crime? Preaching a Sunday homily elaborating on themes straight from Scripture, about the plight of the poor and society’s needed response.

After four months, the Zambian government reversed its decision, allowing the exiled priest, 40-year-old Fr. Viateur Banyangandora, to return. This clemency might never have happened if concerned Catholics in Zambia hadn’t voiced their protest and demanded that justice be done. A united vision shared by concerned Catholics and their hierarchy, convinced a government to alter its course.

Today, our pastor at Mass challenged us to examine our vision. When material blessings come, he asked, do we use those blessings to just meet our own needs and those of our family? Or do we see that the Lord is giving riches to us, that that they might pass through our hands to people in need? A special type of vision allows people to receive a material blessing and then open their grip, to pass it on to others.

Our new Holy Father gives us many lessons along these lines…and he’s enriching our vision of living a devout Catholic life.

So many incredible stories emerged from Pope Francis’s World Youth Day visit to Brazil. When a nine-year-old boy jumped barricades to embrace the Holy Father, the boy held the Pope’s face in his hands and whispered in his ear, “I have a very important message for you...I want to become a priest.”

Pope Francis hugged the boy and said, “Your dream begins to fulfill today. I will pray for you, but you must pray for me.” Pictures showed the boy afterward, overwhelmed by joy and emotion, covering his face with his hands. His vision of a vocation propelled him to leap past those barricades. And now the Holy Father shares his vision, and will pray for him.

It reminds me of the St. Therese of Lisieux moment when the young girl broke free and cast herself at the feet of the pontiff in Rome, to tell him of her desire to enter the convent at age 15. We can see how that story ended, with Therese of Lisieux becoming one of the most beloved saints of all time.

So, thank God for supernatural vision. A vision toward a specific goal can make a tangible difference, like in the case of Fr. Bwezani receiving his truck and Rosaries.

A grateful vision glorifies the mundane, such as a humble rodent being considered a gift for nourishment.

A godly vision toward riches causes us to share them with others.

A vision of faith compels us to leap over obstacles, to spread our love of Christ to others.

Let’s pray to the Holy Spirit daily, to open our eyes. An inspired vision, changes everything.