Commonly referred to as "Skyrim" (or Elder Scrolls) with guns, Far Cry 3 is an interesting, epic-scale video game of vast proportions. However, the question remains: does that make it a good video game? 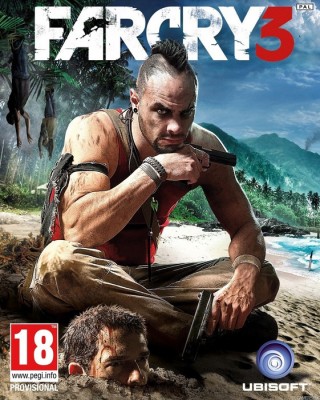 Jason Brody was on vacation with friends and family when they suddenly found themselves on the wrong island. Captured by pirates, Jason escapes, walking into the open arms of the island locals, the Rakata. In order to save everyone he loves, Jason must learn to battle the armed pirates, the wild animals, and even the island itself in a battle where there will only be one victor.

This game is fairly straightforward.  If you've ever played a FPS, these mechanics are downright easy. The player can craft and modify their own weapons, wielding a vast array of weapons, from land mines, Molotov cocktails, grenades, flamethrowers, flare guns, and a variety of pistols, submachineguns and assault rifles. There are multiple types of vehicles, several types of cars, boats, in addition to a glider for easy transport along the island.

After killing a pirate or an animal, the player can loot the corpse or skin the animal, using the skins to carry a greater quantity of weapons, ammunition, or loot.

The skills one can develop are along a basic tree, anything from greater lung capacity while swimming underwater, to how much more loot and plant life Jason can harvest.

There is some great voice acting here, mostly by our #2 enemy, Vaas, who gets surprisingly little screen time for the impact he makes on the plot, and on the player. He's a foulmouthed, utterly deranged psychopath, but there's also a person in there.  He's a person who's having fun being evil, but also seems to understand that, yes, he's made his choices, and in his lucid moments, he's not very happy about it. But he's still the bad guy, and trust me, he is going to try and kill you. A lot.

The music is very "African regional," chanting, heavy on the drums ... it's okay, but nothing that will take my breath away.

The graphics, however, are stellar. Like Crysis 2, Far Cry 3 doesn't need cut scenes.  The graphics are detailed and usually quite good, and the voice work is outstanding.

Argh.  This is where the game started to get sketchy, even for me. Even without knowing the game's ending, the entire storyline had a omnious feel to it.  Even the allies, the Rakata, gave off a bad vibe.

There are drugs all over this game. There's drugs that you yourself make for healing, exploring, and fighting. However, what you pick up off of bodies include cocaine packets, there are multiple kilos of white power just lying around. There is swearing all over the game, including in the loading screens.  There's torture, nudity, hookers calling out for customers, and general unpleasantness.

I don't think so. While the gameplay is fun, it starts to feel like work after a while. The mini-missions don't really grab me, and there are only two outcomes to the game.  There's not a lot of variety here.  Would I play it again? Maybe. I'm not sure.

The game was okay.  Don't get me wrong, the game play was great, and it was a treat to fight enemies that weren't stupid, as well as dealing with the local fauna.  But the story was just so ominous from the start, it cast a shadow over the whole thing, and it was generally off putting.

Also, while Vaas, the psycho, was a great bit of acting, everything else here felt recycled.  The twist with the Rakata was fairly visible from almost the beginning, there's a CIA officer on the island who has Jason do fetch and carry missions, and he feels like every CIA agent from television in the 80s and 90s.  Even Jason's story, from "innocent bystander to action hero" was the same plot of Tomb Raider, but the story wasn't as well put together.  At least with Lara Croft's character arc, she had problems killing animals, and then, her first person -- Jason goes from never having harmed an animal to easily knocking off human beings.

This game would have to be seriously rewritten before I recommended it to anyone in general, to heck with the readership of CatholicMom.com.

ESRB Rating: M for Mature, 17+. For once, I won't argue.  At all. For language, nudity, and for when Jason is on fire, or being mauled by an animal.