This recipe is best served when tomatoes are at the height of season. Around my neighborhood I have lots of gardeners and they love to share their bounty. So if you haven't canned your tomatoes into salsa or marinara give this tomato pie a try.

If you received your tomatoes from a friend, why not make an extra pie for them? What a nice thank you for sharing, not to mention it puts a total new meaning to regifting. 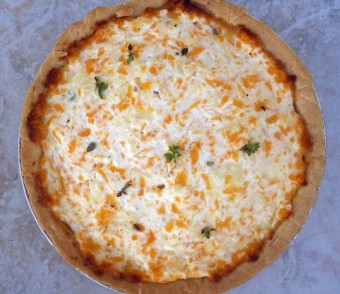 DIRECTIONS:
Preheat your oven to 350 degrees.

Using a fork poke holes in the bottom of your pie plate. (This is called docking) Place in to a preheated oven and allow to cook for 10-15 minutes or until lightly browned.

Remove from oven and allow to cool.

While your pie shell is cooking, slice tomatoes thinly and layer in a colander in your sink. Sprinkle with salt and allow to drain while your shell is cooking. You can also dab the tomatoes with a paper towel to get some of the excess water off of them. This is an important step because if you do not get most of the liquid out the bottom of your pie it will be soggy.

By now your pie plate should be removed from the oven. Allow it to cool for a little while while you make the topping. Combine the two cheeses and yogurt in a medium bowl.

Layer the tomatoes, basil and onion in the pie shell. Sprinkle with salt and pepper. Spread your cheese and yogurt mixture on top of the tomatoes and allow to cook for 30 minutes or until the top is lightly browned.

Cut into slices and serve warm.