7 Business Lessons from the Football Field for Mompreneurs [Movie Review: When the Game Stands Tall] 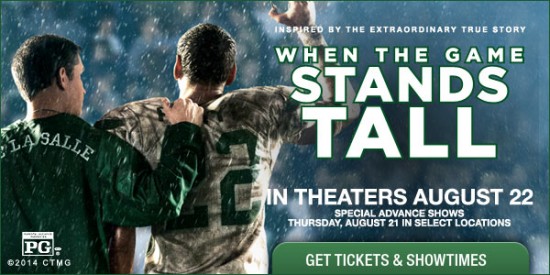 I rarely have an opportunity for a date night with my oldest son, but when I offered him and a friend tickets to a preview screening of a football movie, I instantly became the greatest mom on the planet! Andrew and I saw When the Game Stands Tall with our friends Cindy and Nick and we all agree the movie speaks to moms as much as it does to boys. It chronicles the lives of the coaches and players of the De La Salle High School football team in Concord, Ca. With an unprecedented 151-game winning streak, the Spartans are doing something right. But it is more than just winning football games.

Whether you’re a football mom, a swim team mom or a dance mom, I think you will agree that sports are the classroom of life. Especially when there is a great coach in the picture. In fact, coaches (like teachers) have the power to help shape a child’s character and set a player on the path to a winning life on so many levels.

Based on a true story, When the Game Stands Tall is overflowing with lessons of character for today’s youth…messages of dedication, brotherhood, leadership, faith, forgiveness, humility, love and honor. As I sobbed and cheered my way through the film, I couldn’t help but glean a few encouraging messages for the mompreneur. (You know I’m always thinking of you!)

7 Business Lessons for the Mompreneur from When the Game Stands Tall:

(I’ll try to do this without spoiling the movie, since it doesn’t come out in theaters until August 22!)

Many of us mompreneurs have a perfectionism problem. We expect perfection – which makes us less successful and more critical of ourselves. I’d like to suggest we take a page out of the Spartan’s playbook and expect a perfect effort. What if we went to work each day ready and willing to give a perfect effort? What if we let go of the need to achieve and embraced the desire to serve? What if we applied that thinking to the job of motherhood as well? I think I’d like to play that game.

2. It’s not WHAT you do that matters…it’s HOW you change lives in the process.

Coach Bob Ladouceur could have moved on to lucrative coaching positions in college or professional football, but he was more interested in transforming character than winning games or earning a paycheck. “Winning a lot of football games is doable. Teaching kids there’s more to life? That’s hard,” says Ladouceur.

No matter WHAT you do in your business, you have the opportunity to teach, preach and reach people through your work. Maybe God’s plan for your business or ministry has nothing to do with your bottom line and everything to do with the effect you have on the people you serve. I’m not suggesting we ignore traditional measures of success – that would be irresponsible. But I do believe we are called to look at the impact of our work through the eyes of Christ.

3. Remember, the Reward is not the Award. Player Chris Ryan makes a difficult decision in the last game of his high school career. He shows maturity and courage when he puts the needs of the team above his own. Despite pressure from his father to achieve a state scoring record, Chris goes for the REWARD of teamwork over the AWARD of an individual.

When you’re running a solo business or freelancing, it’s often difficult to see beyond your own goals and your need to carve out a legacy or make a name for yourself. You may think that awards and accolades will help attract clients and build your credibility. But this film reminds us that it’s not about collecting recognition. I believe the true REWARD in running your own business is the ability to share your gifts with others while making time for what matters most in your life.

4. Don’t let your business define you. I was talking with a client the other day who was at a crossroads in her business. She was making the decision to let go of her office lease and move her business back home. She admitted that it made financial sense and provided so many benefits for her family. But she was having a difficult time letting go of the prestige that comes with leasing a “real” office in town.

The defensive coach of the Spartans tells his players “Don’t let a game define who you are. Let the way you live your lives do that.” And I feel the same way about our businesses. We have to stop letting the successes, failures or natural transitions in our business or ministry define who we are personally and professionally. We are so much more than that. And the way we live our lives tells more about who we are than our business accomplishments ever could.

5. You have more potential than you think. A defensive lineman named Beaser gives a courageous performance for the Spartans by facing his fears. While physically outmatched by opponent Buster Matthews, Beaser doesn’t let that stop him from giving a perfect effort. In fact, he prepares in advance by facing Buster in his mind every day.

Whatever your David and Goliath story is, you can learn from Beaser. You may think you are up against the impossible in your business but you can do all things through Christ who strengthens you. Your potential is there. You just have to face your fears like Beaser.

6. Love is the secret weapon to success. What do the De La Salle Spartans have that other high school football teams lack? The movie tells us the answer is love. Love of the game. Love for one another. And love for our Lord.

You may not be doing everything the ‘experts’ tell you to do in your business or ministry. You may not be blogging often enough, or pinning images on Pinterest, or bringing in sponsorship funds, or traveling to conferences, or building your team…but if you love what you do and you love the people you serve, I suspect you have a winning formula.

7. Stand Tall. The film encourages young athletes to stand tall for what they know is right. It calls on youth to stand tall in terms of endurance, authenticity, unity, justice, humility, grace and love. After a crushing loss, Coach Ladouceur tells the team, “We got lost…caught up in the hype, the glory and the relentless pressure. That’s not who we are. We need stand back up and find our way again.”

Hello? Ever feel that same way about your business success? It’s so easy to get caught up in the hype, the glory and the pressure…and to forget you who really are and where you are trying to go. I was moved by Coach Ladouceur’s words to #StandTall in business. To stay true to my values and to never compromise character for success. To ignore all the bad business advice , to make room for grace and to play a smaller game if necessary.

I am counting on you – my fellow mompreneur – to help me #StandTall and I’ll be here to keep you accountable for the same goal. Let me know if you’re with me. Together we can kickoff a winning streak for Christian mom entrepreneurs around the world!