Perspective: In Art, Life, and Suffering 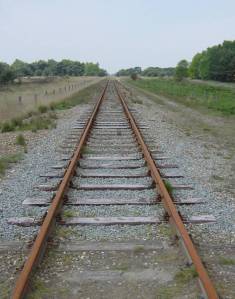 With such instability in our world today, we may be searching for perspective. Consider first, perspective in Art.

Perspective drawings have a horizon line, which is often implied. This line, directly opposite the viewer's eye, represents objects infinitely far away. They have shrunk, in the distance, to the infinitesimal thickness of a line named after the Earth's horizon.

In a perspective drawing, the scene includes parallel lines that have one or more vanishing points. All lines parallel with the viewer's line of sight recede to the horizon towards this vanishing point. This is the standard "receding railroad tracks" phenomenon.

But this line is seen not only in Art, but also in Philosophy--the study of the fundamental nature of knowledge, reality, and existence.

The French philosopher and Jesuit priest, Pierre Teilhard de Chardin, refers to it as The Omega Point, and thought of it as a cone--one that we are all rising through to its apex--Christ. He clarifies it like this: "Remain true to yourself, but move ever upward toward greater consciousness and greater love! At the summit you will find yourselves united with all those who, from every direction, have made the same ascent. For everything that rises must converge." (Flannery O'Connor fans will recall this as the title of her last short story collection, influenced by the philosophy of de Chardin).

"In a Universe of "Conical" structure Christ has a place (the apex!) ready for Him to fill, when His Spirit can radiate through all the centuries and all beings; and because of the genetic links running through all the levels of Time and Space between the elements of a convergent world, the Christ-influence, far from being restricted to the mysterious zones of "grace," spreads and penetrates throughout the entire mass of Nature in movement. In such a world Christ cannot sanctify the Spirit without (as the Greek Fathers intuitively perceived) uplifting and saving the totality of Matter. Christ becomes truly universal to the full extent of Christian needs, and in conformity with the deepest aspirations of our age the Cross becomes the Symbol, the Way, the very Act of progress....."

I will pause the quote here--because this speaks to me--in a philosophical way-- as an explanation of why there is suffering in our God-created world, something so hard for a human being to accept!

But de Chardin continues..."Within a Universe of convergent structure the only possible way in which an element can draw closer to its neighboring elements is by tightening the cone. In such an order of things no man can love his neighbor without drawing nearer to God and, of course, reciprocally (but this we knew already). But it is also impossible (this is newer to us) to love either God or our neighbor without assisting the progress, in its physical entirety, of the terrestrial synthesis of the spirit: since it is precisely the progress of this synthesis which enables us to draw closer together among ourselves, while at the same time it raises us toward God."

Another pause, because I see in this a value for suffering.

de Chardin, continuing again..."Because we love, and in order that we may love even more, we find ourselves happily and especially compelled to participate in all the endeavors, all the anxieties, all the aspirations and also all the affections of the earth...."

As a child, my grandmother --who lived to be nearly one hundred years old-- never failed to comment on the pain of my skinned knees, the loss of a boyfriend, my less than good grade, or any of my youthful disappointments Her words were always. "Offer it up." I had no real idea what she was talking about until I reached adulthood and went through some very trying and tearful times. Her words were the same, with a little added on: "Offer it up. Suffering has a value."

But because we are human, our physical selves find that hard to accept. So I think we have to be philosophical about it. We have to have a perspective. We have to raise our minds to the intangible to come to any idea of why suffering?