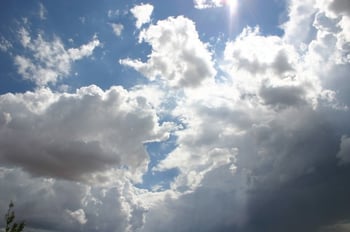 I know when we get to heaven basking in the glory of God will fill our being, but my earthly self is hoping for a few answers. No, I’m not going to ask where all the missing socks when. After all, it’s heaven and I won’t want to be reminded of laundry.

I do not have to know everything just: who killed John F. Kennedy, why did God make mosquitos and how did the saints who were mothers handle the teenage years? If I have to pick one, the last one will be it.

By reading about the saints, I’ve learned of their heroic love for God which compelled them to love and serve others, and adore God at every moment in every way...but I’m still in the dark about how they handled those nitty gritty teen rearing problems. Yes, I know all about St. Monica. She prayed herself to sainthood in order to steer St. Augustine off the road to perdition. But from what I read, St. Augustine never complained that other kids’ parents let them drive to school and let them pierce their ears. And I know St. Augustine did not have an electric guitar.

The mothers who became saints prayed their heads off (sometimes quite literally among persecuted Christians) and provided examples of virtue and holiness. But I’ve never read anywhere how these mother’s handled wet towels on the bedroom floor or dirty socks stuffed under sofas. I know many saints accepted humiliation and abuse of every sort from others, ranging from public officials to husbands and in-laws. For the most part, they actually seemed to enjoy it because of all the graces and sacrifice it encompassed. But humiliation and abuse is not something a mother can accept from her children so she would need to respond more assertively.

I depend on the saints to guide my earthly behavior. For instance, at the grocery store, if someone careens into my cart, scowls at me as if I were to blame and then cuts me off on the way to the check out stand, I am fairly confident that in my place, a saint would smile meekly, say a prayer for the offender, and perhaps even offer a few of her own coupons.

In the case of a nasty in-law, there are many who offered an example of love as repayment to harshness, gossip and overall nastiness. So if an in-law turned up her nose and acted like she was gagging on the saint’s cooking, I know the saint would smile and offer to make her a cheese sandwich or order a pizza. In the case of husbands, again the examples are plentiful. Blessed Anna Maria Tiaga, a contemporary of Napoleon Bonaparte and mother of seven, had a husband who was...well...a jerk. I can safely say that since A) he is dead and B) that is pretty much what the record says about him. He was described as a person who was difficult to the point of speeding his wife to her sainthood.

I do not know specific examples of teen rearing, however, that I can apply to my own life. If the saint’s child said something in a disrespectful sort of way, what would the saint do? Or if the child had some loud irritating music on and the saint told him to turn it off, and instead of falling all over himself to do it, the child’s eyes rolled in a way unbecoming of the fourth commandment, what would the saint do?

Did saints nag when their children when they repeatedly left their shoes and laundry all over the floor? Did they raise their voices when their children were already called to dinner three times? I want to know if they were as patient the tenth time they asked their teen to do something as they were the first time...or is patience unsaintly at that point? Will love and prayer cure all evils? Did the saints ever have to threaten their children to clean their room or else, and what was the “or else?” And did the saint ever “loose it” or admit that her kids were driving her crazy? Were there any straws that broke the saints’ backs?

I am sure the saints’ kids were not all little saints themselves.   So when I get to heaven, I want to look into the lives of these saints and see just how they handled the teens. What I suspect I may find is that there are a whole crowd of mothers who credit survival of the teen years as being just exactly what got them straight to heaven.

Stop talking about college plans, and run your own race
Read
What I Didn't Say
Read
Getting Cut -- A Patron Saint for Those Who Don't Make the Team
Read