An interview with Connie Rossini, author of Trusting God with St. Thérèse.

Connie gives practical advice for overcoming fears and frustrations that hamper our relationship with God. I asked her about her father-daughter relationship as compared to that of Louis Martin and his daughter St. Thérèse of Lisieux.

Nancy: Thérèse was blessed with parents who were “more worthy of heaven than of earth.” Thérèse had a special relationship with her father, who called her, “my Queen.” She formed her image of God from her father who never denied her love, affection and care. How did your father-daughter relationship compare to this?

Connie: In some ways, my relationship with my father when I was growing up was miles apart from the relationship between Thérèse and Louis. I am very quiet and reserved. As a child, I was also timid. My dad, in contrast, was outgoing and frank. He was also the primary disciplinarian. My mom often said, "Wait till your dad gets home!" I grew nervous around him. I avoided talking to him about any serious subjects.

In my book, I tell how my dad left me home alone when I was about five. When he returned about an hour later, he didn't show any sympathy for my fears. So that didn't help my relationship with him or God.

Nancy: In Trusting God, you convey many lessons about God Thérèse learned from her father. One of my favorites is

By rejecting the notion that she had to do lots of good works in order to earn God's friendship, Thérèse became free to trust in God's goodness, rather than her own. His faithfulness did not depend on hers. She could trust him as her all-loving Father. Would Louis withhold his love from his girls unless they did great things for him? Of course not! Then neither would God.

She did not have to work wonders in order to please God. She simply had to love him. Her confidence in him was childlike. She left more childish attitudes behind.

What is your favorite lesson about God that you learned from your father?

Connie: You might think that my dad only gave me negative experiences when it came to trust. He was a great model of trusting God in some areas of his life. When I was ten, my parents felt that God was calling them to join a Catholic charismatic community or form a new one. They were thinking about moving from southeastern Washington to Seattle. But after some prayer and talking with others, my dad believed God was calling us to move to Minneapolis instead. And my parents obeyed without hesitation.

My dad believed God was working in his life as he did in the life of Abraham--whom I also wrote about. Like Abraham, my dad said yes to a move before he knew the destination. I love that example.

Nancy: When your father returned home such a different man after the accident affected his memory, did your view of him change significantly? Did it change how you saw God?

Connie: At first the accident had a very negative impact on our relationship. I was seventeen and apt to be hypercritical of my parents. My dad initially had total memory loss, then permanent problems with short-term memory. I lost respect for him. Instead of being compassionate, I was angry.

On the other hand, he became more relaxed and understanding. Over time—a matter of several years—I began to see that my view of God, as always being exacting and looking to punish our sins, might be flawed. I began to long for another view of God, a more loving relationship with him.

Nancy: Thérèse tells a story to Fr. Belliere about how she perceives the love of Jesus toward his disobedient children.

"I would like to try to make you understand by means of a very simple comparison how much Jesus loves even imperfect souls who confide in Him: I picture a father who has two children, mischievous and disobedient, and when he comes to punish them, he sees one of them who trembles and gets away from him in terror, having, however, in the bottom of his heart the feeling that he deserves to be punished; and his brother, on the contrary, throws himself into his father’s arms, saying that he is sorry for having caused him any trouble, that he loves him, and to prove it he will be good from now on, and if this child asked his father to punish him with a kiss, I do not believe that the heart of the happy father could resist the filial confidence of his child, whose sincerity and love he knows. He realizes, however, that more than once his son will fall into the same faults, but he is prepared to pardon him always, if his son always takes him by the heart."

This practical story impressed me greatly. How did it change your image of God the Father and increase your trust in him?

Connie: This was the passage that started me on the road to true trust. I read in other saints' writings that we should remain calm when we sin, but I had never understood that on an emotional level. I began to look at my sins from God's perspective. Since I am a parent, I could relate to the father's response in Thérèse's story. My youngest son, who is three, loves to give kisses. About a year ago when I first started disciplining him, he would respond a lot like the son in the story. When I reprimanded him, he would immediately throw his arms around my neck and say, "I'm sorry, Mom." Then he would kiss me all over my face. What parent could be harsh after that? I realized God would react the same way to my expressions of childlike trust and love. 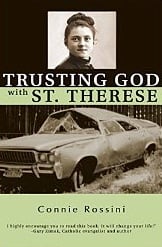 Connie Rossini gives whole families practical help to grow in holiness. She is the author of the free e-book Five Lessons from the Carmelite Saints That Will Change Your Life. She writes a spirituality column for The Prairie Catholic of the Diocese of New Ulm, Minnesota, and blogs at Contemplative Homeschool. She is also a columnist for SpiritualDirection.com. Connie and her husband Dan have four young sons.

Trusting God with St. Thérèse is available as an e-book and paperback at Amazon.com. The paperback is also available at BarnesandNoble.com.