5 Saintly Surprises for All Saints Day

Editor's note: Today we welcome Chris and Elaine Weickert as contributors. They own Catholic Saint Medals and Catholic Family Gifts, and we think you'll be as delighted with the surprises they have to share today as we are to share them. - Sarah

All Saints Day is a common feast day of the entire Church for all martyrs. On it we honor the saints both known and unknown. Our Catholic devotion to the saints connects us, the faithful of the Church present, to the Church past and the Church eternal.

There are literally thousands of saints, known and unknown; little known and well-known. We are fortunate to work with them every day in our business. Doing so we often uncover a surprise or hidden treasure when we discover some element of their life story. Here are five of our favorites.

My 300-year-old book is popular today.

Elaine: I first discovered St Francis de Sales when trying to find a quote to embroider onto a pillowcase for my daughter. (I can spend a LOT of time on Goodreads searching for quotes!) What I found seemed perfect for her temperament:

“Do not worry about tomorrow. The same everlasting Father who cares for you today will care for you tomorrow and every day. Either He will shield you from suffering or give you unfailing strength to bear it. Be at peace then and put aside all anxious thoughts and imaginings.”

That prayer was my introduction to St Francis de Sales's writings. It became even more meaningful for me a few months later when she was hospitalized and I brought that pillowcase to her at the hospital. Thankfully, the stay was short and I am grateful for the blessing of her continued good health.

St. Francis de Sales was born in 1567 in France. He received spiritual formation from the Jesuits. An Introduction to the Devout Life, his best-loved work, continues to be a bestselling book even today. It is based on notes he wrote for a cousin for marriage. In it he stresses that sanctity is possible in everyday life.

"Great occasions for serving God come seldom, but little ones surround us daily."

His gentle instruction and sermons seem to reach through time to speak to me. It was a revelation to me that I can take a deep breath and do the small things that within my grasp. 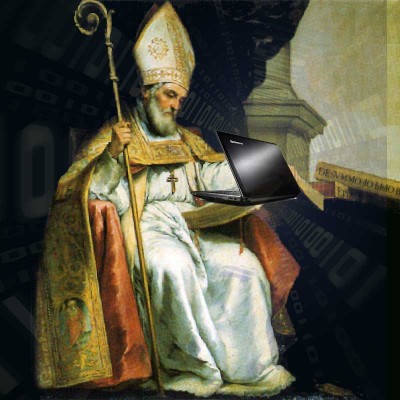 Big deal, my textbook was used for 900 years and I’m up for Patron of the Internet.

Chris: Book bills for grade school, high school, and college make me appreciate the idea of a textbook that can be used for more than a year or two.

The extensiveness of this encyclopedia and its connection to information are at the root of the idea that St. Isidore might fit well as the Patron of the internet. Riffing off this theme, early in our online business, I retouched an image of St. Isidore, replacing the book in his hand with a laptop and sent it to the tech support department of our hosting provider to hang in their offices.

Opening the door for people opened a path to sainthood

Elaine: St. Andre Bessette was canonized in 2010 and I learned about him at the RBTE that year. The DVD God’s Doorkeeper was being promoted. Brother Andre welcomed people as the porter and messenger at Notre Dame College in Montreal. I was inspired that despite his humble position and poor health St. Andre welcomed all into the college with a sense of hospitality and genuine care. God was served in his generous hospitality and humility.

I am someone who uses to-do lists to organize my time and has an appreciation for those who can really “get things done.” Learning about a humble man whose devotion to God and St. Joseph moved the hearts of thousands through serving them at the door opened my eyes to my own opportunity to do good in tasks that don’t seem important or glorious. A friend of his once said: “He spent his whole life speaking of others to God and of God to others."

Chris: The Corpus Christi Monastery of the Poor Clare Colettine Nuns is a few miles from our house. Within the cloister walls of this monastery the sisters live a life of prayer, worship, work and sacrifice. Their foundress St. Clare of Assisi, a 13th century Franciscan, never would have seen a television much less owned one. Why then was she named the patron saint of television by Pope Pius XII?

The period between 1948 and 1959 is referred to by some as the “Golden Age of Television.” In his 1958 Apostolic Letter proclaiming St. Clare Patron of Television Pope Pius XII says:

“…And the Church, which never showed progress contrary to civilization and technology, encourage this new assistance to the culture and daily life, and the same is used readily for teaching the truth and the extension of religion.… It is reported that in fact Assisi, one Christmas night, Claire, bedridden in her convent by the disease, heard the fervent chants that accompanied the sacred ceremonies and saw the nursery of the Divine Child, as if it was present in person at the Franciscan church. In the splendor of the glory of his innocence and clarity it sheds on our darkness so deep, so that Claire protects this technique and gives the translucent device to shine the truth and virtue necessary pillars of society.”
[a rough Google translate from the original French]

In the 2013 closing comments of his address to the Vatican Television Center Pope Francis reiterated the influence of this medium and invoked St. Clare’s patronage:

“Let us pray to the Lord that he make us capable of reaching the hearts of men and women, overcoming the barriers of diffidence, and we ask Our Lady to keep watch over our steps as “pilgrims of communication”. I ask you to pray for me, I need it! I invoke the intercession of St Clare, Patroness of television, and I accompany you with my Blessing.”

Now that’s something to consider when channel surfing. 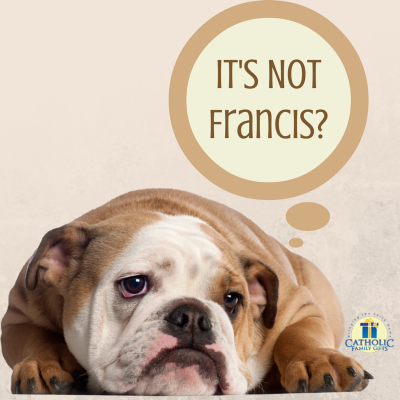 Doggone-it, the Patron of Dogs is not St. Francis!?!

Elaine: When I was in high school I found and brought home stray dogs three separate times. Looking back I can now appreciate how my parents may not have been as excited about my finding these shaggy creatures!

Everyone I know immediately thinks of St Francis of Assisi as the patron saint of animals. I have been known to send up a prayer to him when we are choosing a shelter pet to share our lives.

Did you know that St. Roch is the patron saint of dogs? I didn't either! He is known to be a French noble who lived in the 1300s. He cared for plague victims in Italy and was known for miraculous cures. When he contracted the plague himself he went to the woods to die. We are told he was found there by hunting dogs who brought him food and licked his wounds, which began to heal. It is said that he returned to Rome with the dog where they worked to care for and heal the sick and dying.

Every day has a surprise in it.

Parenting is a life of challenges and surprises. Add to that the reality that we are all called to sainthood, just like the five saints we shared, and suddenly the chances of being surprised or challenged each day grows quickly. Frankly, it is a little scary to imagine what God might do in us and in our children as we open our hearts, listen to Him, and bring to life what He tells us. Is it worth it? Oh yes!