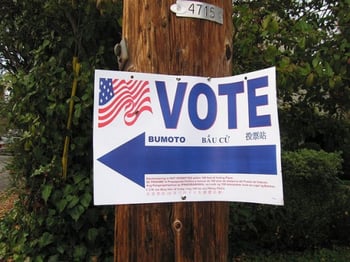 The other day I mentioned to my recently-turned-eighteen-year-old that she would get to vote for the first time today. She looked at me with a touch of panic in her eyes and said, “I don’t know who to vote for!”

It was evident from my daughter’s face that she thought voting was a big deal. She viewed it almost like a school assignment; something to prepare for and research so that you’ll be ready for the “test” on your ballot.

I used to feel that way. Somewhere along the way, though, I lost my sense of wonder about the fact that one little citizen has the power to select or reject a candidate or law for whatever reason they want. I got busy. I got cynical. I got lazy.

Be honest. When you know Election Day is approaching, do you spend time researching the candidates, the proposals, and the propositions OR do you watch a few newscasts and political ads, walk into the voting booth and hope you don’t screw up too badly?

I know. I know. You’re all much better citizens than me. I guess I’m the only one who doesn’t spend hours poring over news articles and proposed legislation before casting my ballot. The sad part is, I know I should do a better job of deciding what vote to cast. It’s part of our responsibility as Christians to cast our vote according to our (hopefully well-formed) conscience. Paragraph 1915 of the Catechism of the Catholic Church states, “As far as possible citizens should take an active part in public life.” It goes on to say that the ways we do that vary from country to country and culture to culture. In the U.S., one of the easiest ways we can participate in public life is to vote.

So, I helped my daughter research the candidates and issues and she helped me to take my responsibility more seriously. It wasn’t the first time that she’s taught me something and I promise that it won’t be the last.

We voted today. Did you?