Patron Saint of What? 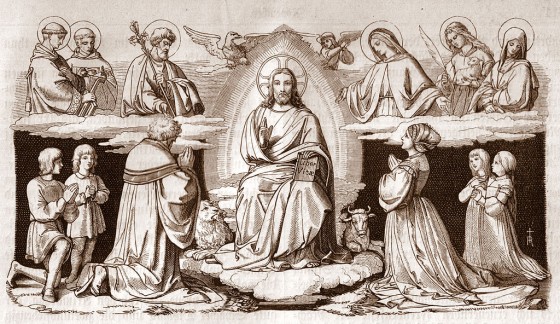 Because of the recent celebration of All Saint's Day, I got to thinking - of what will I one day be patron? Not that I have any grandiose ideas of becoming a canonized saint. I fully trust, and hope, that my feast day will be November 1, along with the many other quiet, hidden saints who have lived and are living in this world.

I will probably have to go through some purging first so that I will be truly ready to see God in all His glory. When I finally make it, though, for whom will I intercede? No doubt, I will continue to pray for my family before the throne of God. Still, I want to be in charge (yeah, it is in my personality) of some group of people, pleading on their behalf before the Almighty God. You know, kind of like a heavenly lobbyist!

As I was cutting coupons from Sunday's paper, I thought maybe I could be the patron saint of coupon clippers and bargain hunters. Then I realized that my friend, Linda, is so much better than I am at finding deals and using coupons to get such a bargain that mine pale in comparison. Plus, she is the one always calling me to say, " Such-n-such store has chicken for $1.99 a pound" or "That market has 1/2 gallon of milk for $1.50, and you can get as many as you want!" I believe that in Heaven Linda will be crowned patroness of coupon cutters.

I like my daily dose of coffee. Perhaps I could pray from my heavenly mansion for the coffee bean farmers and plantation workers. But then I decided that CatholicMom's own Sarah would probably have them under her watchful spiritual eye.

Lisa, of course, would be the patron saint of mommy bloggers. What else is there for me?

Some saints are the patrons of those who share their profession in life. Thus, St. Luke is the patron saint of doctors; St. Isidore, the patron of farmers; and St. John Baptiste de la Salle, patron saint of teachers. I have been a director of religious education,  a youth minister and most importantly, a mom. In all humility, I know there are others who were and are far more deserving of being any one of their patrons.

Other saints become patrons according to the deaths they faced. My parish patron, St. Bartholomew, was flayed to death; hence, he is the patron of tanners (not as in sun-tanners, but as in those who skin animals and turn their hides into leather). St. Agatha is invoked by those suffering from breast cancer, since in the tortures she endured because of her faith, her breasts were cut off. Then there's St. Denis, the patron saint of those who suffer from headaches. He was beheaded, and according to legend picked up his head and carried it 40 kilometers all the while preaching! Talk about not letting a bit of a headache slow you down! Sometimes the Church seems to have a sense of humor, as does our Lord!

Since I do not know what type of death I will face, this idea does not seem to work. Hopefully, my death is many years down the road after I have totally completed my mission here on earth. Then I hope to die quietly, in my bed, of exhaustion, my body giving up as I have spent my last bit of energy living for the Lord. Perhaps then I will become the patron saint of the exhausted. It's a possibility! Until then, I still have lots to learn, to perfect, and to give.

There are some saints, on the other hand, who become patrons that have nothing to do with anything they experience while on earth. Take, for example, St. Fiacre. This Irish hermit, who crossed the English Chanel to live in the middle of nowhere in the woods of France in the 5th century, is the patron saint of cab drivers. Apparently, the very first taxis in Paris  would park their horse-drawn coaches outside of the Hotel de St. Fiacre. Thus, Paris taxis became known as "fiacres" and St. Fiacre the patron of their drivers.

I think I want to go along that route. I want to become the patron saint of something that I did not experience while here on earth, yet is meaningful to me. I also hope its irony gives others a little smile. I decided that when I am in eternity, for as long as there is time, I want to pray for couples who experience infertility. As a mom of 10, that would be ironic, indeed. I cannot imagine my life without even one of my children. Thus, my heart breaks for these couples. Infertility is, I know, a heavy cross to carry. Likewise, it is a mystery I do not always understand. There are good people who would be wonderful parents, yet they cannot conceive naturally. So, in Heaven, before the Beatific Vision I will beg God to send a precious soul to the couples who so longingly desire a child of their own. Maybe, just maybe, through my intercession, a few more babies will be born.

Hey, I do not have to wait until heaven. As a matter of fact, I can and do pray for these couples now, and will continue to so, in time and eternity.

Which leads me to ask, what do you think you would be patron saint of? I ask, not to be silly, but to help you set a very important goal. After all, the world needs you in time and eternity.